World meeting will engage all of society to help strengthen families 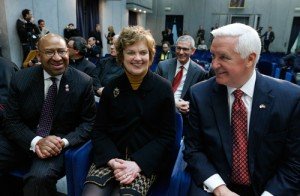 VATICAN CITY (CNS) — The World Meeting of Families in Philadelphia next year will be open to families and people of different faiths, including no faith at all, to engage the wider society in dialogue and to serve and strengthen all families, organizers said.

The gathering Sept. 22-27, 2015, “is meant to be a gift not just for Catholics in Philadelphia, but for every person of good will in the Commonwealth of Pennsylvania, the surrounding regions and the wider world,” said Archbishop Charles J. Chaput of Philadelphia.

Meetings that bring together thousands of people from many different parts of the world with different experiences are a source of “tremendous joy” and grace and “have the power to transform, in deeply positive ways, the whole public community,” the archbishop said at a Vatican news conference March 25.

Archbishop Chaput visited the Vatican with Pennsylvania Gov. Tom Corbett and Philadelphia Mayor Michael Nutter as part of a delegation of government, religious and community leaders meeting with Vatican officials to plan the 2015 international family gathering. They also expected to have an audience with Pope Francis during their March 24-26 visit.