With Pa. as a Model, Education Tax Credits May Come to Federal Budget 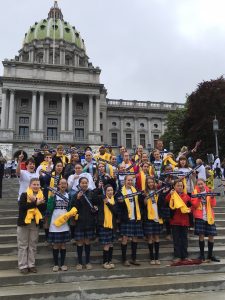 From the Catholic News Service — Health care wasn’t the only issue before Congress this summer even though it grabbed most of the headlines. Lawmakers also held budget talks that included proposed cuts to education spending.

In mid-July, members of the House Appropriations Committee voted to advance a bill to cut $2.4 billion from the U.S. Department of Education’s budget primarily through trimming teacher training programs.

That’s because there is a new emphasis in school choice — tax credit scholarship programs — that have been gaining momentum on the state level and getting more bipartisan support than standard school voucher legislation.

Catholic leaders, hoping to move on this trend, are optimistic that a federal tax credit scholarship program is not far behind, possibly as part of a broader tax-reform package. Members of the Secretariat of Catholic Education of the U.S. Conference of Catholic Bishops met with Education Secretary Betsy DeVos and House members over the summer to talk about the potential of such a program.

“We want to keep the drum beating about this,” said Greg Dolan, associate director for public policy for the USCCB’s education secretariat.

He told Catholic News Service July 27 that federal tax credits are appealing because they do not directly involve the government with school tuition aid.

With vouchers, parents receive funds directly from the state to pay for part, or all, of their child’s education. Scholarship tax credits remove the state as middle man since corporations or donors contribute to scholarship grant organizations charged with dispersing funds to families for tuition payments. For these contributions, the companies and other donors receive a tax credit.

Opponents of tax credit scholarships claim they are a back door to vouchers and question if there is enough accountability or inclusion of students with disabilities with such a program.

Currently, 17 states offer some type of scholarship tax credit, according to the National Conference of State Legislatures. The programs in these states differ in the types of scholarships or tax credits offered, student eligibility requirements and in allowing mission-based, or religious, schools to participate.

Backed by the success of some state tax credit scholarship plans, the bishops’ education office would like to see a similar program take place on a federal level as long as it includes Catholic schools’ participation.

The bishop thanked them for their “leadership in encouraging true choice for parents and their children” and said tax credit scholarships have “enormous potential to improve the lives of all children.”

But he also urged them to include certain provisions in the proposed legislation. Namely, schools that accept scholarship students “must retain their autonomy” in their religious identity and character and they also need to be able to keep “control of mission-driven hiring, academically stringent admissions and curriculum.”

Bishop Murry stressed that any federal tax credit program should “ensure real opportunity to access non-government education” and should be available for qualifying families across the country with incomes up to 400 percent of the federal poverty level.

The program’s success, he said, should be evaluated by participating families and by the number of families renewing scholarships, student graduation rates and acceptance into college.

If the government is looking at a particular state as a model for a nationwide tax credit program they should look at Pennsylvania, said Dolan, noting that it allows scholarship donations to be given to religious schools.

Amy Hill, communications director for the Pennsylvania Catholic Conference, said the program has helped tens of thousands of students to attend nonpublic schools — noting that Catholic schools are a choice, but not the only choice, for qualifying students.

“It empowers parents who might not feel they have the means on their own,” to send their children to nonpublic schools, she added.

Hill said the program has bipartisan support and has expanded its funding for the next year.

In Illinois, the state’s Catholic conference has been promoting a scholarship tax credit program for the past two years. This summer, Chicago Cardinal Blase J. Cupich met with the governor to promote this the effort.

Jim Rigg, superintendent of schools in the Chicago Archdiocese, sent parents an email blast in late July saying there is “some hope” that tax credit scholarships will be included in an education funding compromise.

For now, advocates of tax credit scholarships see the state efforts as encouraging, but not enough.

As Dolan pointed out: “A more uniform policy is needed.”