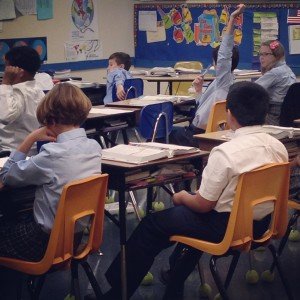 Savvy investors do their homework. Before buying stock they will research a company’s track record. Is the company making sales? Expanding its market? Are customers satisfied? It is smart to invest in proven success.

Providing a quality education for our children is the most critical investment we can make for our future. As Pennsylvania’s lawmakers debate and discuss the spending plan for the Commonwealth’s 2015-2016 fiscal year, they will have to consider where to put our money.

Both programs are funded by companies that contribute to scholarship organizations in exchange for a tax credit. The longstanding EITC program has given more than 450,000 scholarships to help students attend the school of their choice, including Catholic schools. The three-year-old OSTC program has given nearly 9,000 more special scholarships, particularly for income eligible students who live in communities with the lowest performing public schools.

EITC tax credits are often depleted on the first day of their availability. OSTC credits are also exhausted, and every scholarship organization has a waiting list of potential scholarship recipients. The need for more credits, to help more parents pick the best school for their children, is evident. Demand is strong.

Representative Jim Christiana (R-Beaver, Washington) is the prime sponsor of House Bill 752 which would increase the EITC to $170 million and OSTC to $80 million. “Both the EITC and OSTC programs are very successful programs that have given thousands of Pennsylvania children school choice and the opportunity to participate in innovative educational programs,” he wrote in his memo encouraging other representatives to cosponsor the bill. “By expanding the EITC and OSTC programs, my bill will allow even more children to benefit.”

There is strong bipartisan support for expanding EITC and OSTC.

“Particularly in failing public school districts, young men and women need to have the exact same opportunities (as any student),” Speaker of the Pennsylvania House of Representatives Mike Turzai (R-Allegheny) told students at Philadelphia’s De Paul Catholic School. “We are convinced that the EITC and OSTC are making a difference.” Turzai is a cosponsor of HB 752 and a champion of the school choice provided through the tax credits.

Senator Jay Costa (D-Allegheny), Democratic Leader, called the expansion of the tax credit programs a “win-win.” At a luncheon in Pittsburgh he told EITC supporters, “This is more of a program to benefit students and the business community. It’s not full-blown school choice. It’s providing options and programs for some students.”

A generation of students who went to the school of their choice with EITC scholarships have demonstrated its successful track record. Catholic schools are the largest group of non-public schools in Pennsylvania. Most Catholic high schools boast graduation rates at or near 100%. Of those graduates, over 90% go on to attend either a two or four-year institute of higher learning. OSTC scholarship students will soon live up to their peers. These “customers” – our students and their parents – are indeed satisfied.

All parents should be able to choose a school that best suits their children. Financial realities often preclude parents from having that choice. Parents who pay their school taxes deserve some benefit from those taxes, in the form of some assistance in the exercise of their right to choose a nonpublic school, if that is best for their children. EITC and OSTC are making a difference for many families and for our communities. It is a smart investment to allow more to have that choice.

Urge your legislator to “invest in success” by cosponsoring and voting in favor of House Bill 752. Use the Pennsylvania Catholic Advocacy Network at to send your message today.