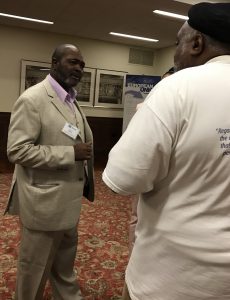 Ajamu joins members of the Pennsylvania Moratorium Coalition at a recent event recognizing its 10th anniversary. The Pennsylvania Catholic Conference is a member of the coalition and a long-time supporter of legislation to repeal the death penalty.

In August 1975, a jury found Ronnie Bridgeman (who has since changed his name to Kwame Kamau Ajamu) guilty of murder and a judge sentenced him to death.

“I was marked for death.”

Almost four decades later, a witness who was 12 years old at the time recanted his testimony and an Ohio judge cleared Ajamu of all charges, exonerating him.

To date, over 150 individuals have been exonerated from death row, Number 150 being one of them.

This is his story of survival, perseverance and healing.

“The miscarriage of justice that eventually leads to someone  being put on death row – that destroys families. We look at the men and women on death row – a lot of us miss the wife, the mother, the sister, the father, the brother, the children who have been pulled away in a sense. No one thinks about them.”

Ajamu was just 17 when he, along with his older brother, was incarcerated and sentenced to death.

“My mother was the only one there for me.”

“When I got a five-year continuance from the parole board, it was on a Friday. I thought I’d call my mother after the weekend.”

The call was never made; Ajamu’s mother passed away that Friday.

“You cried, ‘I didn’t do it’ the first day.” After that, Ajamu was determined to prove his innocence through action.

While incarcerated, Ajamu focused on educating fellow inmates as a way to cope with his sentence. He and five other inmates started an education system within the prison by establishing a cooking school.

“On my watch thousands of men got all the way from ABCDEFG to a Bachelor of Science degree because I was the one who would keep making them go.”

He would leave prison as the administrative clerk for the educational department for over 20 years and with one mark on his parole paper: Outstanding  Program.

“It has become a quest of mine to visit as many places as I can to promulgate these words:  end the death penalty.”

Today, Ajamu lives in Ohio and serves as Board Chair to Witness to Innocence, which is the only organization in the nation comprised of and led by exonerated death row survivors and their families who are dedicated to abolishing the death penalty in the United States.

“I’m not just a hired employee, I am a death row exoneree.”

“I think that anyone who comes into the particular situation as I have will realize that first and foremost you have now been given a platform and this platform is specifically geared toward death penalty abolishment.”

Ajamu acknowledges that his speaking engagements will never fully erase the scars of being wrongfully incarcerated; they serve as a form of healing and help to affirm his dedication to helping others – to help them helps him.

On February 13, 2015, Governor Tom Wolf announced he would grant reprieves  on all executions in Pennsylvania, in effect establishing a moratorium while he remains in office. Currently, 169 men and women are sitting on death row in the state.