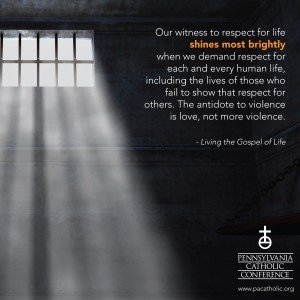 The Pennsylvania Catholic Conference welcomes Governor Tom Wolf’s announcement of a “reprieve to inmate Terrance Williams, who was scheduled to be executed on March 4, 2015. Governor Wolf will grant a reprieve – not a commutation – in each future instance in which an execution for a death row inmate is scheduled, establishing an effective moratorium on the death penalty in Pennsylvania.”

The Catholic Bishops of Pennsylvania have long been advocating for an end to the death penalty in Pennsylvania because the modern penal system provides alternatives to taking the lives of the guilty.  Punishment should reflect our belief in the inherent human dignity of each person, and taking a life to avenge the death of another does not create a culture of life.

People convicted of capital offenses must be punished effectively and appropriately for their crimes. Family and friends of victims, and society as a whole, demand this. Just punishment, however, can be attained without resorting to execution. Even the most violent offenders who commit heinous crimes still have a dignity given by God.

In Living the Gospel of Life, the U.S. Bishops wrote, “Our witness to respect for life shines most brightly when we demand respect for each and every human life, including the lives of those who fail to show that respect for others.  The antidote to violence is love, not more violence.”

In unity with Pope Francis and the United States Conference of Catholic Bishops, the PCC reaffirms absolute respect and protection for every human life, from conception to natural death, even when one of those lives has been responsible for a heinous crime.

Society will not benefit from imposing the death penalty, nor will it be harmed by showing mercy. By turning away from the death penalty, we are embracing hope, not despair.  Today’s announcement breaks the cycle of violence that so plagues our society. We hope that this spirit of respect for human life is shown throughout all laws and policies of the Commonwealth.