Senator Casey Stands Up for Life in Anti-Trafficking Bill Vote 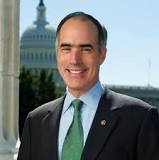 Senator Bob Casey (D-Pennsylvania) this week voted in favor of legislation to combat human trafficking despite strong opposition from many in the Democratic Party. The controversy centered on a fund to help trafficking victims using fines from people convicted of human trafficking offenses. The legislation would restrict this federal funding from paying for abortion.

The language is similar to what is known as the Hyde Amendment which routinely bars the use of tax dollars for abortions. Casey was one of just four Senate Democrats who took the pro-life stand on S. 178, the Justice for Victims of Trafficking Act. Unfortunately, the 55-43 vote was not enough to end the filibuster; 60 votes were needed to move the legislation to a vote.