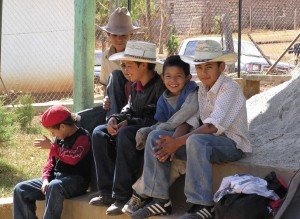 In May 1939, hundreds of Jewish men, women and children boarded the ocean liner St. Louis in their native Germany to flee Hitler’s regime. The refugees were bound for Cuba to await their time when quotas for German immigrants would allow them into the United States. After many days at sea they arrived in Cuba only to be turned away. The ship turned north toward Miami, Florida. Surely the United States would provide a safe haven, they thought. The passengers had filed the proper paperwork for entry to the U.S., yet refuge was denied again. If the families got off the ship, they would be considered illegal immigrants. They had no choice but to return to violent, war-torn Europe.

A few families found safety in England, but more than two thirds of the St. Louis passengers did not escape the Nazis. Almost everyone was killed or enslaved in concentration camps.

What if we had granted asylum instead of deporting those desperate families back to starvation and the gas chambers?

Seventy-five years later there are still places in the world full of violence and despair. Currently there is an exodus of children fleeing Honduras, El Salvador, and Guatemala looking for safety in the United States. They risk the dangerous journey to get away from gangs, drug cartels, human traffickers, and other organized crime. They face daily violence, corruption, endemic poverty with almost no chance for economic and educational opportunity. For some, the basic desire to reunite with family drives their exodus.  Staying in their home countries means certain poverty, likely rape, and a high probability of being murdered.

As a nation we have a right to secure our borders and enforce laws to regulate citizenship, and we can also exercise compassion and influence positive outcomes for these children. We can both respond to this humanitarian crisis and respect the rule of law.

Providing basic care for the children already here will have minimal impact on local communities. When they arrive, every child receives a medical and mental health exam, tuberculosis screening, and any needed vaccinations. Any who are sick are treated; the children do not pose a public health risk.

Shelters supported by federal programs provide temporary food, clothing, shelter, education, and medical care. The children do not leave the shelter and the average stay is only 30 days. Most children have relatives here who can best care for them until their future is determined; others are placed with foster families. Detention of vulnerable populations such as children and asylum seekers is never appropriate.

A compassionate response to the immediate needs of these children is necessary, but it is not a permanent solution to the problem. We should provide quality legal representation for these young immigrants to ensure that we are not deporting anyone truly deserving of asylum. We should give more support to the immigration court system to alleviate backlogs and get the children in safe, permanent and healthy situations. This crisis underscores the overdue need for immigration reform.

Finally, we should implore the international community to address the problems in their home countries that are causing so many people to migrate in desperation.

We don’t know the future, but history will judge us at this moment in time. Will the history books ask “what if” we did the right thing for our brothers and sisters in need? I pray that whatever we do to respond to the influx of immigrant children to the United States in 2014 will be seen as compassionate, positive, and permanent.

Learn more about the status of immigration reform from pacatholic.org and www.justiceforimmigrants.org.

Hill is Communications Director of the Pennsylvania Catholic Conference.