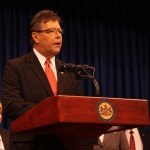 A press conference was held today at the Capitol in Harrisburg in support of pro-life legislation. In attendance were over 35 legislators as well as various leaders of pro-life constituencies.

Francis Viglietta, Director of Social Concerns for the Pennsylvania Catholic Conference, said, “the Pennsylvania Catholic Conference applauds the many House and Senate pro-life legislators from both parties who are committed to advancing legislation to provide additional protections for women and unborn children. Our conference shares this goal and welcomes the opportunity to help accomplish it.”

Two bills were the main focus of the event: Senate Bill 3 and House Bill 574/Senate Bill 732.  Senate Bill 3 prohibits taxpayer funded abortions in the state health care exchanges created by the federal Patient Protection and Affordable Care Act.  According to a 2010 Quinnipiac Poll, 67% of Americans oppose abortion funding in the federal health care exchange.  The other bills discussed, House Bill 574/Senate Bill 732 would hold freestanding abortion clinics to the same fire and safety standards, personnel and equipment requirements and quality assurance procedures as other freestanding ambulatory surgical facilities. Currently, the state’s abortion industry is exempt from commonsense safety standards that apply to other surgery centers.

Over 30 legislators attended a press conference in support of pro-life legislation on Sept. 26.

Rep. Jerry Stern (R-Blair County), Chairman of the Pro-Life Caucus in the House of Representatives, said “the recently released inspection report of Allentown Medical Services furthers the point that the Gosnell situation was not an isolated occurrence and that these facilities need to have a set of licensing standards in place. Whether you are pro-life or not, I can’t imagine anyone would want their wife, daughter or sister getting their teeth cleaned in one of these facilities, much less having an operation or other surgical procedure performed. Abortion facilities should not be exempt from adhering to the same safety and quality assurance standards as other health care facilities – bottom line.”

Sen. Jane Orie (R-Allegheny/Butler), Chairman of the Pro-Life Caucus in the Senate, said, “While this is not an issue created by the pro-life community, we cannot stand idly by and ignore these issues.”

“The Pennsylvania Catholic Conference urges a quick passage of these significant pro-life proposals,” Viglietta said.  To send a message to your legislator in support of these life-affirming bills, click here.