by Blue
100 anniversary, Bishop, Bishop Zubik, Harrisburg, Our lady of fatima, Pennsylvania
Comments are off 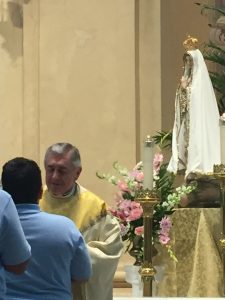 A Mass of Consecration to Our Lady of Fatima was held on Sept. 27, 2017 at Saint Patrick Cathedral in Harrisburg.

From The Catholic Witness – Joining their voices in prayer and lending their honor of the Blessed Mother to strains of Marian hymns with hundreds of clergy, religious and lay faithful, the bishops of the dioceses of Pennsylvania concelebrated a solemn Mass at St. Patrick Cathedral in Harrisburg Sept. 27 to consecrate the state’s Catholic dioceses to Our Lady of Fatima in this 100th anniversary year of her apparitions.

With a beautiful statue of Our Lady of Fatima adorned with flowers flanking the front of the church, the bishops of Pennsylvania’s eight Latin Rite and two Byzantine Rite dioceses gathered at the altar for the Mass, for which Archbishop Charles J. Chaput, OFM Cap., of Philadelphia served as principal celebrant.

This year marks the 100th anniversary of the apparitions of the Blessed Virgin Mary, who appeared six times to three shepherd children near the town of Fatima, Portugal, between May 13 and October 13, 1917. Appearing to the children, the Blessed Virgin told them that she had been sent by God with a message for every man, woman and child living in our century. Coming at a time when civilization was torn asunder by war and bloody violence, she promised that Heaven would grant peace to all the world if Her requests for prayer, reparation and consecration were heard and obeyed.

Bishop David A. Zubik of Pittsburgh was the homilist for the Mass, and his message delivered to the capacity crowd called upon the faithful to emulate the three qualities that the Blessed Mother is shown to embody: to be a witness to Christ, to be a person of prayer, and to be a pers 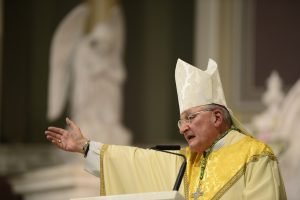 Reflecting on the day’s Gospel passage (Luke 2:27-35) of the presentation of the Lord in the temple and Simeon’s words to Mary that her heart would be pierced, Bishop Zubik remarked that “It is precisely Mary’s role as disciple, and ours as well, that we reflect upon today as we as the Churches of all of Pennsylvania consecrate everything of who we are as Church to our Blessed Lady.”

The Mother of Jesus, he said, embodies three specific qualities in which we are called to follow as disciples of her Son:

“She is a witness, pointing to her son Jesus as she always would do. She shows herself to be a woman of prayer, always knowing how essential and absolutely necessary it is every day to connect with God in prayer. She shows how imperative it is to be a person of sacrifice, to take everything done in her life and to make it holy,” Bishop Zubik said.

Turning to the occasion for the celebration of the Mass that day, the bishop said that Mary’s message to the three shepherd children at Fatima a century ago was one also intended to the entire world: what it truly means to be a disciple of the Lord Jesus Christ.

Within the context of that message, the Blessed Mother was inviting all of us to imitate her as witness, in prayer, and in sacrifice.

“How often we in our world today find Jesus mocked, disregarded, avoided. All the more important because of our baptism and our confirmation, it is essential for us to stand up for, to be witnesses for Jesus as Mary was,” he said.

Mary offers a clarion call “that we should never meet any day without dropping to our knees, honoring the Lord in everything we will be about that day, and that we could not end any day without thanking the Lord for his guidance bringing us through each of those days,” the bishop continued.

And as Mary challenged the shepherd children, “we likewise are called to be people who know the meaning of sacrifice – to make holy everything that we are about in our day-to-day lives,” he said.

Following the homily, the congregation joined the bishops in praying aloud the Prayer of Consecration to Our Lady of Fatima.