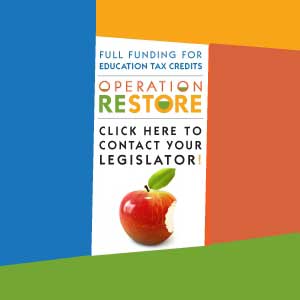 In 2008-2009, the Educational Improvement Tax Credit (EITC) Program was a $75 million program – helping over 44,000 students attend the school of their choice and countless more through innovative programming.

The REACH Alliance launched a grassroots campaign that focuses on restoring funding to the Educational Improvement Tax Credit (EITC) Program – the campaign is called Operation Restore.

The goal for the campaign is to demonstrate overwhelming parent, school, business, community and national support for funding restoration for the EITC Program.

On the campaign website, www.operationrestorepa.org, you will find a function to contact your legislator, testimonials, sample op-ed’s, sample press releases, talking points, one pager’s – tools to help you make your voice heard!