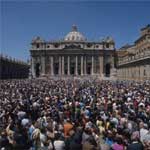 According to a report from the Catholic News Service, the latest Vatican statistics show a slight increase in Catholics as a percentage of the world’s population, and a slow but steady rise in the number of priests and seminarians worldwide.

The statistics, from the end of 2008, were presented along with the new Vatican yearbook Feb. 20.

The Vatican said the number of Catholics reached 1.166 billion, an increase of 19 million, or 1.7 percent, from the end of 2007. During the same period, Catholics as a percentage of the global population grew from 17.33 percent to 17.4 percent, it said.

Looking at the way priests are distributed around the world, it said: 47.1 percent were in Europe, 30 percent in the Americas, 13.2 percent in Asia, 8.7 percent in Africa and 1.2 percent in Oceania.

Read the rest of the story at www.catholicnews.com.

Learn more about Catholic statistics in Pennsylvania at pacatholic.org/resources/pa-catholic-statistics/.