by Blue
Not my friend, PA Family, planned parenthood, taxpayer funded abortion
Comments are off 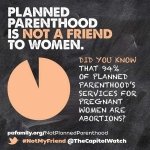 Planned Parenthood receives $1.5 million per day in public funding; $540.6 million in taxpayer funding last year alone (almost half of their total revenue). Planned Parenthood made $58.2 million last year and $383 million in profits over the last 5 reporting cycles (1). All this for the largest abortion provider in the country. Planned Parenthood employees, such as former clinic director Abby Johnson, were given an “abortion quota” to heighten the number of abortions so as to bring in more revenue. Former nurses described Planned Parenthood as a “meat-market style of assembly-line abortions.” Another former PP nurse said employees were threatened with less work hours if abortions were down.

The actions of Planned Parenthood tell us that they are not a friend to women. For specific reasons why, visit www.pafamily.org/NotPlannedParenthood.