by Blue
march for marriage, marriage, washington dc
Comments are off 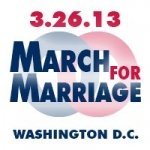 From the organizers of the March for Marriage:

Who  is  the  March  for  Marriage?   The  March  is  being  organized  by  the  National  Organization  for  Marriage  (NOM)
alongside  a  broad  coalition  of  pro-­?family  organizations,  state  partners,  African-­? American,  Latino,  Catholic  and  Protestant  leaders.  Please  check  the  website  for  an   up-­?to-­?date  list  of  co-­?sponsoring  organizations  and  confirmed  speakers.