Majority of Americans, and nearly 6 in 10 young adults, view abortion as morally wrong

by Hill
abortion, knights of columbus, pro-choice, pro-life
Comments are off 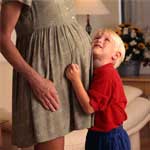 On the eve of the 37th anniversary of the Supreme Court’s decision in Roe v. Wade, which legalized abortion throughout the United States, a new survey shows a strong majority of Americans believe abortion to be “morally wrong.”

The most recent Knights of Columbus – Marist survey – conducted in late December and early January – is the latest in a series of such surveys commissioned by the Knights of Columbus and conducted by Marist Institute for Public Opinion. In October of 2008 and July of 2009, the survey has been tracking an increasing trend toward the pro-life position – a trend confirmed by Gallup and Pew surveys in mid-2009.

“Americans of all ages – and younger people in even greater numbers than their parents – see abortion as something morally wrong,” said Supreme Knight Carl Anderson. “America has turned a corner and is embracing life – and in doing so is embracing a future they – and all of us – can be proud of.”

He added: “Advances in technology, show clearly – and ever more clearly – that an unborn child is completely a human being. That, coupled with the large number of Americans who know one of the many people who has been negatively affected by abortion are certainly two of the reasons that Americans are increasingly uncomfortable with Roe v. Wade’s legacy of abortion, and with abortion generally. The majority of Americans now understand that abortion has consequences, and that those consequences are not good.”

This report presents the findings from a survey of 2,243 Americans –including an oversample of 1,006 Millennials. Reports for Americans have a margin of error of +/-2% and for Millennials it is +/-3%. Data were collected from December 23, 2009 through January 4, 2010 using an online, probability-based panel from Knowledge Networks, Inc.