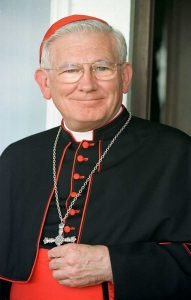 The life of Cardinal William H. Keeler was honored and celebrated on Monday, June 12, 2017, by the Pennsylvania House of Representatives with the unanimous adoption of House Resolution 345.

The resolution was introduced by state Rep. Frank Ryan of Lebanon County.

Cardinal Keeler, who was called to the priesthood at an early age, was widely known for forging strong relationships with other religious denominations.

A native of Lebanon and attendee of Lebanon Catholic High School, Cardinal Keeler served as the seventh bishop of the Diocese of Harrisburg from 1984 to 1989 and was president of the Pennsylvania Catholic Conference Administrative Board. Namely, he was instrumental in arranging Pope John Paul II’s historic 1987 meetings with Jewish leaders in Miami, Florida, and with Protestant leaders in Columbia, South Carolina.

He was appointed the 14th Archbishop of Baltimore in 1989, became President of the National Conference of Catholic Bishops in 1992.

In November 1994, Pope John Paul II appointed then-Archbishop Keeler to the College of Cardinals making him the third Archbishop of Baltimore to receive the distinction.

In his own words: “I wondered about a way of saying thank you to God and giving back to the church and the gifts that God has given to me. It was as simple as that. For me, becoming a priest was not complicated.” – From The Catholic Review of Baltimore.