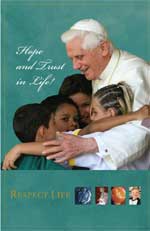 Catholics across the United States will again celebrate Respect Life Month throughout October. Catholic parishes and organizations will sponsor hundreds of educational conferences, prayer services, and opportunities for public witness, as well as events to raise funds for programs assisting those in need. Such initiatives are integral to the Church’s ongoing effort to help build a culture in which every human life without exception is respected and defended.

Education and advocacy during Respect Life Month address a broad range of moral and public policy issues. Among these, the care of persons with disabilities and those nearing the end of life is an enduring concern. Some medical ethicists wrongly promote ending the lives of patients with serious physical and mental disabilities by withdrawing their food and water, even though – or in some cases precisely because — they are not imminently dying. This November, the citizens of Washington State will vote on a ballot initiative to legalize doctor-assisted suicide for terminally ill patients. In neighboring Oregon, where assisted suicide is already legal, the state has refused to cover the cost of life-sustaining treatments for some patients facing terminal illness, while callously informing them that Oregon will pay for suicide pills.

Turning to abortion, we note that most Americans favor banning all abortion or permitting it only in very rare cases (danger to the mother’s life or cases of rape or incest). Today, however, we face the threat of a federal bill that, if enacted, would obliterate virtually all the gains of the past 35 years and cause the abortion rate to skyrocket. The “Freedom of Choice Act” (“FOCA”) has many Congressional sponsors, some of whom have pledged to act swiftly to help enact this proposed legislation when Congress reconvenes in January.

FOCA establishes abortion as a “fundamental right” throughout the nine months of pregnancy, and forbids any law or policy that could “interfere” with that right or “discriminate” against it in public funding and programs. If FOCA became law, hundreds of reasonable, widely supported, and constitutionally sound abortion regulations now in place would be invalidated. Gone would be laws providing for informed consent, and parental consent or notification in the case of minors. Laws protecting women from unsafe abortion clinics and from abortion practitioners who are not physicians would be overridden. Restrictions on partial-birth and other late-term abortions would be eliminated. FOCA would knock down laws protecting the conscience rights of nurses, doctors, and hospitals with moral objections to abortion, and force taxpayers to fund abortions throughout the United States.

We cannot allow this to happen. We cannot tolerate an even greater loss of innocent human lives. We cannot subject more women and men to the post-abortion grief and suffering that our counselors and priests encounter daily in Project Rachel programs across America.

In this Respect Life Month, let us rededicate ourselves to defending the basic rights of those who are weakest and most marginalized: the poor, the homeless, the innocent unborn, and the frail and elderly who need our respect and our assistance. In this and in so many ways we will truly build a culture of life.

For the full text of Cardinal Rigali’s Statement on Respect Life Sunday, go to www.usccb.org/prolife/programs/rlp/08rigali-stmt.pdf.

Cardinal Justin Rigali, Archbishop of Philadelphia, is Chairman of the USCCB Committee on Pro-Life Activities. Go to www.usccb.org/prolife to learn more about the bishops’ pro-life activities.