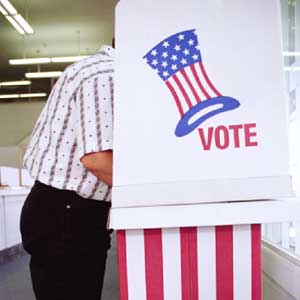 On Tuesday, May 19, 2015, Pennsylvanians will elect candidates to represent their political parties in contests for mayor, city council, county commissioner, township supervisor, school board, and many other municipal positions. We will also vote for judicial candidates: Justice of the PA Supreme Court, Judge of the Superior Court, Judge of the Commonwealth Court, and Judges of Common Pleas Courts.

Electing qualified, capable local officials and value minded judges is just as important as electing the right governor or lawmakers.

Local officials are responsible for corrections and law enforcement, resources to educate our children, public health and safety, human services for people in need, and more. We interact with local government programs every day.

The role of the courts is to preserve the rule of law and guarantee the rights and liberties of citizens.  Judges make decisions that affect everyone, including who has a right to life, what is marriage, when should religion be protected, who can adopt children, and many other important questions.

The challenge with municipal and judicial elections is finding information about the candidates on which to base your voting decision.  Although a federal court clarified that candidates can talk about issues, out of fear that their comments might prejudice future court cases, candidates for judicial office often do not share their personal positions on controversial issues.  However, many special interest organizations do evaluate candidates based on their record or other public evidence of their philosophy.  These groups often endorse one candidate over another.

We can understand a lot about candidates by reviewing their lists of endorsements.  Catholics might be interested in a candidate’s stand on human life, marriage, social justice or other issues.  An endorsement from a pro-life group (for example for example the PA Pro-Life Federation or Life PAC) or a pro-abortion group (like Planned Parenthood) gives us a clue about whether a candidate is pro-life or pro-abortion.  The support of public education associations or taxpayer watchdog groups could, although not absolutely, shed light on how a candidate might feel about school choice.  Endorsements from other like-minded political leaders who do speak out about issues can also provide insight into the philosophy of the candidate.  It is said a person is known “by the company that he or she keeps.”

Every voter should take time to research the candidates.  Many non-partisan organizations such as the Pennsylvania Bar Association or your local newspaper publish voter guides, often including endorsements.  The Pennsylvania Family Institute publishes a voter guide that touches on many issues that are also important to Catholics.  But the most effective way to research is to contact the candidates themselves.  Most local and judicial candidates have their own websites or social media sites which proudly list the endorsements they received.  See who’s on the ballot in your county at www.votespa.com.

Who we elect to city hall or the bench sets the stage for how rights, liberties and justice will be upheld in public policy.  We have a responsibility to elect local leaders and judges who will be fair and responsible, and will uphold the values that make Pennsylvania great.

NOTE: The Pennsylvania Catholic Conference neither supports nor opposes any candidate for public office.