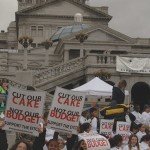 Over 40,000 students are able to attend the school of their choice during the 2009-2010 school year because of the Educational Improvement Tax Credit (EITC) Program, while countless numbers of children in public school will benefit from innovative programs that would have likely gone unfunded. The EITC Program gives these students a chance for a successful future.

In May of 2001, Pennsylvania became the first state to pass an educational tax credit aimed at corporations. Our innovative EITC has been nationally praised as a model for offering parents a choice in their child’s education. Due to overwhelming demand and popularity, the EITC Program has been expanded four times since its enactment in 2001, with a current cap of $60 million.

In the last nine years, over 4,200 businesses have participated in the program, donating over $460 million for scholarships and innovative programming.

On Tuesday, May 4,2010, at noon more than 2,000 children, parents, teachers, business leaders, administrators and lawmakers will gather at the state Capitol to celebrate EITC.