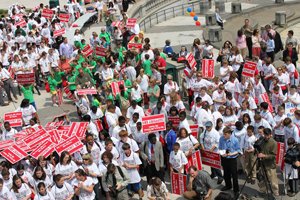 Hundreds of students, teachers, parents and legislators gathered at the Capitol Tuesday to show their support for the Educational Improvement Tax Credit (EITC) Program and to advocate for passage of Senate Bill 1, legislation that would greatly expand school choice options in Pennsylvania. The party is hosted every year with the dual purpose of celebrating the highly-praised program and to thank the legislators for their continued support.

“We are very excited to have so many elected officials and supporters join us to celebrate the EITC and rally for the expansion of school choice embodied in Senate Bill 1,” said Otto V. Banks, executive director of the REACH Foundation – the hosts of this event. “In the past decade, the EITC program has helped over a quarter million Pennsylvania students in both public and private schools. Now is the time to further expand choice options in Pennsylvania by creating opportunity scholarships and increasing funding for the EITC.”

Recognized as a national model and the best example of public-private partnership in Pennsylvania, the EITC program has allowed more than 40,000 students to attend the school of their choice in this school year alone, and hundreds of public school initiatives would have gone unfunded without this program. Since the program’s inception in 2001, over 250,000 students have benefited from the EITC. Additionally, the business community has contributed over $460 million to ensure that Pennsylvania’s children receive the education they deserve.

“Ten years has proven that the EITC program is clearly one of the most successful public-private partnerships in Pennsylvania, a national model for other states, and the foundation for those parents looking for real choice in their child’s education,” said Senator Jeffrey Piccola (R-15/Dauphin & York Counties), chairman of the Senate Education Committee. “But in order to ensure another leg of the school choice stool is complete and to continue ensuring working families have even more options – regardless of their income or zip code – we need to enact Senate Bill 1 and provide opportunity scholarships to our families now. They shouldn’t have to wait any longer for these opportunities.”

“As we celebrate the EITC’s 10th birthday, we celebrate the successes of the program and hope for expansion of school choice in Pennsylvania,” said Banks. Banks noted that the Pennsylvania House of Representatives appears poised to consider HB 1330 soon, legislation that would increase funding for the EITC program. “Expansion of EITC is an important element in the movement to provide educational choice and opportunities to Pennsylvania families.”

Want to help pass school choice in Pennsylvania? Send a message to your state legislator asking him or her to support Senate Bill 1.