First Comes Love, Then Comes…Living Together? 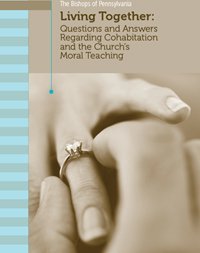 The majority of couples today live together before getting married, but does that make it worth it?

Studies show that cohabiting couples are more likely to divorce than their friends who lived apart until marriage.

Whether cohabitation causes break ups or if it’s an indication of other relationship traits that may lead to a relationship ending, the data are clear. Living apart before marriage and allowing yourselves to more clearly evaluate your relationship, leads to a higher rate of success.

In Living Together: Questions and Answers Regarding Cohabitation and the Church’s Moral Teaching, the Pennsylvania bishops wrote, “Cohabitation is actually the worst way to get to know another person, because it shortcuts the true development of lasting friendship. Those who live together before marriage often report an over-reliance on sexual expression and less emphasis on conversation and other ways of communication – ways that ultimately lead to a more fulfilling sexual union after marriage.”

Simply put, living together to prepare for (or as a substitute for) marriage can lead to heartbreak down the road. Many couples living together feel marriage is inevitable – with bank accounts, mortgage and other aspects of life already intertwined –  and so enter into marriage thanks to inertia.

The bishops of Pennsylvania remind us that marriage can be so much more, as illustrated in this historical example “In the early days of the Church, living together outside of marriage was common among the non-Christians in the Roman Empire – as was the use of artificial contraception. But these practices were devastating for individuals, families, and society. Women were treated as disposable objects, mere toys for sexual pleasure, to be discarded when passions waned. The Christian vision of marriage and family led to happiness and fulfillment for individuals and families – and a great renewal of culture and society. Far from being outmoded, then as now, the Church’s teaching is revolutionary – and it works!”