Despite budget fight, an effort focused on students 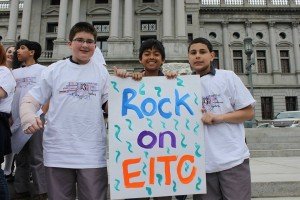 Students support EITC at a rally in Harrisburg, PA.

Excerpted from The Philadelphia Inquirer:

Pennsylvania has long been a pioneer in school choice, providing tax-credit programs that enable tens of thousands of low- and middle-income families to place their children in the most appropriate educational settings. But the state’s budget stalemate threw these crucial programs into a dangerous limbo.

Ultimately, Gov. Wolf took the necessary steps to free up the $150 million in scholarship funding from Pennsylvania’s unique tax-credit programs, which give pre-K-to-12th-grade students the ability to attend the nonpublic schools best suited to their needs and beliefs. If not for the governor’s last-minute approval, this year’s funding would have been lost.

The establishment of the Educational Improvement Tax Credit (EITC) in 2001 and the Opportunity Scholarship Tax Credit (OSTC) in 2012 enabled companies to support school choice opportunities for Pennsylvania children. To date, these programs have yielded approximately $900 million, providing scholarships for more than 50,000 students annually.

This school year’s last-minute release of tax credits for schools wrought unnecessary drama for Pennsylvania families. Without the funding, some of them would have been forced to disrupt their children’s education by pulling them from their schools and moving them into others less suitable to them.

That this saga had a happy ending was due in large part to the state’s school-choice community uniting to advocate for children, as well as strong bipartisan support from the legislature.