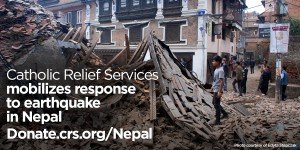 Damage in Swatha Square, Patan (one of the 3 districts of Kathmandu) from the 7.8 magnitude earthquake that struck Nepal and India on April 25, 2015. Photo courtesy of Edyta Stepczak (used by permission)

Catholic Relief Services (CRS) is launching a major relief effort in response to the devastating earthquake that struck Nepal on Saturday, April 24. A CRS team is on the ground in Kathmandu, the capital city and one of the most affected areas, and our local partner Caritas Nepal has started distributing food and shelter.

The initial targets of CRS aid will be the thousands in need of shelter. Many buildings were destroyed or damaged in the 7.8 magnitude quake, and continuing aftershocks are causing widespread fear of sleeping inside of even intact buildings.

“Rainfall last night made life difficult for those remaining outside,” said CRS India staffer Kushal Neogy, who was in Nepal during the earthquake. “Thankfully the rain stopped around 11 p.m. and people were able to sleep peacefully through the night as there were no major tremors. “The morning started with a bright sunny day, but occasional rain is predicted today and tonight with strong winds as well,” he added.

Working with Caritas Nepal, CRS’ initial goal is to help 10,000 families with emergency shelter, blankets, water treatment kits, and hygiene kits. Given the scale of the disaster, the number receiving help is expected to rise as our staff and partners are able to better assess the situation, coordinate our response with other agencies and procure additional supplies.

As this region, including northern India, is known for earthquakes, CRS had prepositioned stocks of emergency aid in nearby Bihar, India. These supplies — temporary shelter kits (tarpaulins, mats, rope), water purification kits and hygiene kits for 2,000 families – are being transported to Nepal for immediate distribution. Teams are also purchasing and transporting other critical relief items from India to transport into Nepal since most markets in Kathmandu remain closed.

An additional 3,000 tarpaulins will be flown from a hub in Dubai for distribution within the next couple days. More emergency personnel are on the way.

Catholic Relief Services has made an initial commitment of $825,000 to relief efforts in Nepal, a figure that is expected to rise as the needs become clearer. The official death toll is approaching 4,000 – with thousands more injured — but few outlying villages have been reached and widespread destruction, especially in hillside settlements, is feared.