by Blue
hunger, sen joe scarnati
Comments are off 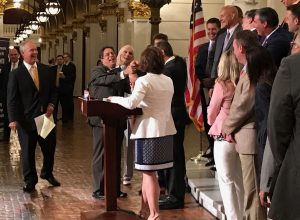 One out of every eight Pennsylvanians struggle with hunger, and sadly, nearly 500,000 children are included in that statistic.

The Pennsylvania Catholic Conference is proud to support the Pennsylvania General Assembly’s initiative to combat hunger and food insecurity across the state.

On September 24, 2018, senators and state representatives will be playing a friendly “Yinz vs. Youse”/”East vs. West” charity softball game. Proceeds from the game will benefit hunger-fighting programs statewide administered by Feeding Pennsylvania and Hunger-Free Pennsylvania.

This will be the third such game played. Since 2013, the event has raised over $130,000 to fight hunger in Pennsylvania.

Recently, legislative team captains, including Sen. Joe Scarnati (R-Jefferson) held a “draft day” news conference to draw attention to the purpose of the event and to secure team rosters.

More information can be found at capitolallstars.org.