A Break in the Budget Impasse 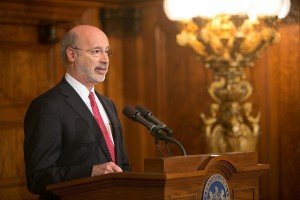 On Tuesday, December 29, 2015, Governor Tom Wolf finally signed a spending plan for Pennsylvania, although only part of it. He exercised his right to line item veto the budget bill passed by the General Assembly just before Christmas. After a six-month political stand-off between the governor and the General Assembly, some state funds will finally start flowing to the programs that provide services to people in need.

State Budget Secretary Randy Albright said in a press conference that funding for public schools from the basic education subsidy will be paid now, but only to cover the first six months of the fiscal year which has already passed. The amount equals roughly 45 percent of the total appropriation. “The balance of those funds will be blue-lined until the General Assembly can agree on a final spending package,” said Albright.

Governor Wolf also vetoed line-items that affect the operation of the legislature, some corrections programs, agriculture programs, and other smaller programs. See the list of vetoed line items here.

Fortunately, the line items that benefit clients of Catholic charities, social services agencies, and alternatives to abortion programs; the poor and under-insured who receive health care at Catholic medical facilities; and students in our non-public schools move forward with the full year’s funding.

Catholic charities and social service agencies provide services for state-funded programs like housing, foster care, or drug and alcohol counseling. Most of Pennsylvania’s counties rely on Catholic agencies as subcontractors to provide these critical services to the community.

Catholic hospitals have a special mission to provide care for everyone who needs it, regardless of their ability to pay. Our health care facilities provide a high number of services or beds to Medicaid, Children’s Health Insurance Program (CHIP), and patients who are covered by other state supported health care insurance programs.

Nonpublic schools do not receive basic education tax dollars, but their students do benefit from line items that pay for textbooks, materials, equipment, and services that support their secular education through the Intermediate Units. The proposal this year finally achieves equity between public and nonpublic students – the line items increased modestly at the same rate. The Pennsylvania Department of Education will begin to process textbook orders immediately.

Thousands also benefit from scholarships funded by the Educational Improvement Tax Credit (EITC) and Opportunity Scholarship Tax Credit (OSTC) programs. The programs were funded at the same level as last year, but allowed to go forward. Approval letters to the companies that applied for the credits in July were sent last week, giving them the green light to make their donations to scholarship organizations before the end of the 2015 tax year.

It is expected that state funding checks to the approved programs will be sent immediately. This is welcome news for all who benefit; however the political turmoil remains. There is much work that still needs to be done.