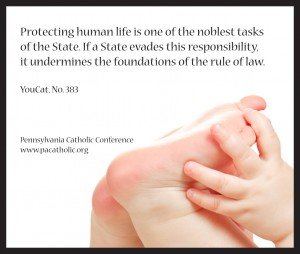 The Pain-Capable Unborn Child Protection Act did not get the 60 votes needed to end debate and proceed to a vote in the U.S. Senate this week. The pro-life bill that would ban abortions after 20-weeks is based on research that shows unborn babies are capable of feeling pain at that point in their development.

The cloture vote was defeated 54-42. Three Democrats joined with Republicans to support the pro-life bill, including Joe Manchin of West Virginia, Bob Casey of Pennsylvania and Joe Donnelly of Indiana. Two Republicans, Susan Collins of Maine and Mark Kirk of Illinois — voted against it.

The conviction in 2013 of Philadelphia’s Dr. Kermit Gosnell for crimes committed while providing abortions has led many Americans to realize that our permissive laws and attitudes have allowed the abortion industry to undertake these procedures. People are repulsed by the callous and barbarous treatment of women and children in Gosnell’s clinic, and in other clinics that abort children after 20 weeks.

These procedures also pose serious dangers to women, as evidenced by Gosnell’s own manslaughter conviction for one woman’s death, and news about the death or serious complications of other women undergoing such procedures.

This week’s Senate vote is an unfortunate defeat for women and babies.