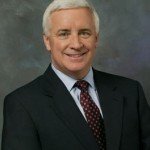 More Pennsylvania adults will be accountable for stopping and preventing child abuse with the recent passage of legislation that broadens the definition of who is a mandated reporter.

State Sen. Kim Ward of Westmoreland County sponsored Senate Bill 21, which broadens the definition of mandated reporters to include “all health care professionals and health care facilities, school employees, coaches and independent contractors in schools, and any individual paid or unpaid who accepts direct responsibility for a child.” State Representative Todd Stephens of Montgomery County sponsored House Bill 436 which clarifies a mandated reporter’s basis to report child abuse and enhances the penalty scheme for those who fail in this obligation. Governor Tom Corbett recently signed these bills into law on April 15, 2014.

“Requiring more people to report abuse will mean more chances to prevent it,” said Dr. Robert J. O’Hara, executive director of the Pennsylvania Catholic Conference. “The Catholic dioceses of Pennsylvania have been on this path for more than a decade and we commend the legislature for their work to create a safer environment for all children in Pennsylvania.”

The 10 Catholic dioceses in Pennsylvania have offered more than two million trainings to children and adults to recognize signs of abuse and require all clergy, employees, teachers and volunteers who work with children to report anything suspicious.

Each diocese maintains a safe environment program with the cooperation of parents, civil authorities, educators and community organizations. The programs require training for anyone who comes in contact with children and extensive background checks for employees or volunteers whose duties include ongoing contact with minors.

In 2002, the United States Conference of Catholic Bishops issued its Charter for the Protection of Children and Young People. All 10 Catholic dioceses in Pennsylvania comply with the charter and have zero-tolerance policies in place for the sexual abuse of children. Dioceses promptly report allegations of sexual abuse of a minor to public authorities.

The new law is another one of recommendations made by the Task Force on Child Protection, which issued a 445-page report that scrutinized the child abuse laws and regulations in Pennsylvania. In December 2013, Governor Corbett signed 10 other bills that impose some of the stiffest penalties for child abuse in the nation.

“We commend the General Assembly and Governor Corbett for expanding the list of mandated reporters in Pennsylvania and for taking action on the Task Force’s other recommendations,” added O’Hara. “We are all responsible for stopping and preventing child abuse.”

The Pennsylvania Catholic Conference encourages anyone who has been or is a victim of child abuse or suspects a child is being abused to contact the Pennsylvania ChildLine at 1-800-932-0313.

Additionally, Pennsylvania’s Catholic dioceses have support services in place to assist survivors of child abuse in their healing process. For more information about those services, please contact the coordinator in your diocese.