We hear of many of the issues that are being addressed by lawmakers in Harrisburg, especially the ones that are controversial or have lawmakers divided. But there are many more that come and go with little attention and are just as, if not more, important.

One key issue in particular that has generally flown under the radar is being looked at by Rep. Jason Ortitay (R-Washington & Allegheny Cos.) and is one that he hopes would prevent anything noteworthy from happening. It involves school safety and detecting problems before tragedy hits. Ortitay says he is working with teachers unions and school boards to set up safety threat assessment teams.

“They’re meant to find and detect threats in behavior before that becomes problematic,” Ortitay told me in his Capitol office. “If there is a child displaying bad behavior, we could get them the help that they need to eventually get better. It’s a proactive measure that we’re trying to do instead of being reactive.”

Ortitay said it’s a model that was developed in Virginia. It would make sure that every single school district in the state sets up a team for each one of their schools. It could consist of a superintendent, teacher, school nurse, member of the community, school resource officer, and/or a police officer.

That’s just the first half of Ortitay’s proposal. The second bill would provide for what he says is a “hardening of the school district.” He says it would make teachers feel empowered.

“You talk to some of these teachers and they feel helpless right now. If someone comes into the school with a firearm or any kind of weapon to hurt children, they feel like they’re not prepared.”

“There’s a group of teachers and a group of kids and they’ll basically rush (the gunman) as they come around the corner. One person goes for the arm. One goes for the gun and everybody else goes low until they tackle them to the ground. And they teach them as soon as the gun goes to the ground, you just get it away and then cover it.

“It’s terrible that we even have to talk about this,” Ortitay said. “But if somebody comes in, they’re prepared. If people know this about the school district—that the school district has a procedure in place for when the alert goes off. The teachers are trained to find the fastest escape route or where students need to go.”

Ortitay says officials have found that when schools become hardened like this, there is less likelihood that someone will want to try something there.

“What intruders want is maximum casualties. And they’re not going to get that anymore because these schools are prepared for anyone who comes into the building like that.”

Ortitay says he has been on the School Safety Committee that was formed from last year’s budget. He says grant money would make sure that this project is funded for all schools. 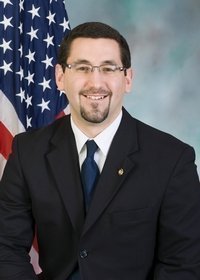