Philadelphia, Pa.–A Special Prayer Service for Peace in Ukraine was held Sunday, March 16, 2014 at 5 pm in the Ukrainian Catholic Cathedral of the Immaculate Conception here. 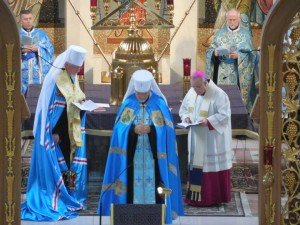 Archbishop Stefan Soroka, of the Ukrainian Catholic Archeparchy of Philadelphia, and Metropolitan of the Ukrainian Catholic Church in the United States, Archbishop Charles J. Chaput, O.F.M. Cap. of the Latin Catholic Archdiocese of Philadelphia and Archbishop Antony, Metropolitan of the Ukrainian Orthodox Church in the United States joined approximately 30 priests and over 500 faithful in the prayer service asking for the intercession of the Most Holy Mother of God in extending her Holy Mantle of Protection over the people of Ukraine during these days of international crisis.

Metropolitan-Archbishop Soroka welcomed his brother archbishops, clergy, religious and faithful.  He recounted how the joy of an independent Ukraine in 1991 has now turned to sadness.

“All of us have joyously been celebrating the annual anniversaries of a free and democratic Ukraine since 1991.  Hope and excitement for Ukraine and its people overtook us.  These sentiments have now been replaced with great sadness and worry for our brothers and sisters in Ukraine.  Confusion and anger have overtaken our hearts and minds as we have witnessed the callous trampling of people’s rights and freedoms in Ukraine.  All of Ukraine is being subjugated to oppressive and controlling authorities, characteristic of communist times.  We remember the souls of those who have lost their lives and others who have suffered severe beatings in the struggle for freedom. Our beloved nation of Ukraine is being divided using force and intimidation.  The oppressors have shown complete disregard for the freedoms and liberties which all people in a free world desire and are entitled to.  We all are worried for the safety of our families and for the future of Ukraine.  We are saddened by their sufferings.  We share in their feelings of great uncertainty as to their future.”

He reminded that faithful that “We gather before the Mother of God in this holy Cathedral dedicated to her.  We pray before the beautiful icon of her and ask for her intercession for Ukraine.  Let us entrust Ukraine and its people to her care.”

“A breath of hope overtakes us as we share our hardships with the loving heart and comforting hands of our Blessed Mother.  Let us entrust the sufferings of the people of Ukraine to her.  She understands.  Our Blessed Mother is the hope for all Ukrainians enduring the pain of suffering. She is our hope and comfort in our sorrow for Ukraine.  Whatever the challenge, we are told that Mary “kept all things, reflecting on them in her heart.

“Let us offer the pain and sufferings of our beloved Ukraine and its people, and our feelings of concern and anger to our Blessed Mother in shared prayer.  Let us pray with confidence that our Blessed Mother will hear our prayers, keep them close to her heart, and entrust them to her Son, Jesus Christ,” Metropolitan Soroka said.

Archbishop Chaput said, “Our traditions as Ukrainian or Roman Catholics may be different, but each tradition is equally rich, equally important, and the Catholic faith we both share is one and the same. In the end, we’re one Church and one people of God, and I want you to know that your brothers and sisters in the “other” Catholic Archdiocese of Philadelphia – the Roman one -are praying for you and for the people of Ukraine in special way.

“I want you to know that many, many people of good will admire the leadership of your Church here in Philadelphia and in Ukraine for standing up for the Gospel of Jesus Christ, for democratic government and for the dignity of the human person. Thank you for your courage. God bless you for your witness. And please know that all of you will remain in my prayers,” Archbishop Chaput reassured the faithful in concluding his remarks.

Metropolitan Antony, in his reflection to the faithful, said, “We are praying here today before the Mother of God for a people, for a nation that over the centuries has lived through cataclysm and cataclysm, after cataclysm.

“By the grace of God and the protection of His Holy Mother, Ukraine, as a nation and a people exists.  Ukraine exits as an independent nation.

“Today we pray, as we always have, for her Holy Protection and ask for her intercession before her beloved Son Jesus Christ.

“I call upon you all to pray for our people…Dedicate your prayers during this holy Lenten Season to the Mother of God asking her to intercede once again; to hold up that veil of protection over all of our people.”

“Pray for our people.  Pray for those who have the audacity to stand up and say, we have rights, there is dignity in humanity, there is a sanctity of life, that we will die for in order to preserve the future for our children.

During the Prayer Service, the Gospel of Luke (Luke 1, 39-49, 56) was proclaimed by the Rev. Andriy Dudkevych in Ukrainian, and Very Rev. Andriy Rabiy in English.

The faithful sang many hymns before and after the service, including Prenebesna Prechudesna, (Most Heavenly, Most Wonderful), O Spomahi Nas (Always Protect Us) Boshe Poslyukaj Blahannya (God Hear Our Prayer) as well as the praises to the Mother of God during the Moleben service.

In concluding comments, Metropolitan Soroka thanked his brother bishops, clergy, religious and laity for their heartfelt participation in the prayer service.

The Moleben to the Most Holy Mother of God for Peace in Ukraine ended with the singing of three verses of the Ukrainian National Anthem.

After the service many of the faithful expressed their comments to the several reporters from local news media that covered the event.

Andrew Fylypovych, who has relatives in Ukraine told Dan Wing, CBS News, “It’s absolutely unbelievable. The propaganda that the Russians are trying to pull over on the world is remarkable. Calling Ukrainians as being oppressors of Russians is absolute nonsense. Ukraine simply wants to exist on its own, be friendly with everybody, and live a normal life.”

Stefan Makuch, 83, recalled for Philadelphia Daily News reporter Jason Nark, how his family was uprooted during World War II in Ukraine. He fled the Russian army by moving west, away from his hometown of Zboriv (called Zborow, Poland, when he was born). His family worked in displaced-persons camps in Vienna and Bavaria, he said.  In 1950, his family came to Philadelphia and never left.

“Why did we move away? We were at the risk of being liquidated by the Russians,” said Makuch, a former investigator for the Philadelphia Medical Examiner’s Office.

“Right now, the government that is in power is trying to right things, and stabilize things and turn back toward Europe,” he told the reporter.

Videos from the Prayer Service are posted on our YouTube Channel at http://www.youtube.com/user/thewayukrainian