The World Meeting of Families Coming to Philadelphia 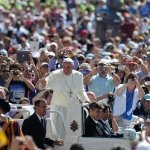 People from around the world will gather in Philadelphia this September for the World Meeting of Families and Pope Francis’ first visit to the United States. More than a million and a half people are expected to participate in a week of activities, including Mass celebrated by the Pope on the Benjamin Franklin Parkway.

“I believe this event has the power to transform, in deeply positive ways, not just the Catholic Church, but our entire community,” said Archbishop Charles Chaput, O.F.M. Cap., of the Archdiocese of Philadelphia.

The World Meeting of Families is expected to bring an economic impact of approximately $417 million to the region. More than 150 countries will be represented by the attendees and more than 10,000 volunteers will serve at the event. It is estimated that some 7,000 members of local, national and international media will come to the Commonwealth to cover the event.

The theme for this year’s gathering, “Love is Our Mission: The Family Fully Alive,” helps participants understand the critical role the family plays in society. Attendees will share in the many blessings and challenges that come with the family unit, including love.

The World Meeting of Families started in 1994, when Pope John Paul II announced the international “Year of the Family.” The event has grown to be the world’s largest gathering of families and has been held in Rome, Rio de Janeiro, Manila, Valencia, Mexico City and Milan.

Archbishop Chaput said, “In preparing for the World Meeting of Families, we have been blessed with wonderful support from the entire community. Of special note is the willingness of business, civic, and cultural leaders to become engaged. Whether Catholic or of another faith tradition, they have responded equally with open hearts, great enthusiasm and strong commitment.”

World Meeting of Families – Philadelphia 2015 will take place September 22 – 25 at the Pennsylvania Convention Center. The schedule includes keynote speakers and breakout sessions, daily Mass and devotion, and youth activities. To register for the event and for more information, visit www.worldmeeting2015.org.

Pope Francis’s visit will take place on September 26-27 and will include the Festival of Families, an intercultural celebration of family life around the world and a Papal Mass. Both of these events will take place on the Benjamin Franklin Parkway.