by Hill
abortion, anti-abortion, Congress, No taxpayer funding for abortion act, pro-life, U.S. House of Representative
Comments are off 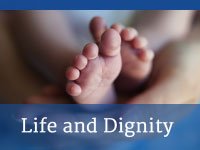 UPDATE: The pro-life No Taxpayer Funding for Abortion Act (H.R. 7) passed with bipartisan support by a vote of 238-183 in the U.S. House of Representatives on January 24, 2017. Contact our U.S. Senators and urge them to support it.

Sunday, January 22, 2017, marked the 44th anniversary of the deadly Roe v. Wade decision. Yet, even while we mourn the lives lost and hearts broken by legal abortion we can recommit ourselves to building a culture of life where everyone is welcomed in love and protected in law. We must, and together we will continue to advocate for public policy that protects life and liberty.

The U.S. House of Representatives will soon consider H.R. 7, the No Taxpayer Funding for Abortion Act. This important pro-life legislation will make the protections of the consistent federal policy known as the Hyde Amendment and other current abortion funding prohibitions permanently part of the law to be enforced government-wide. It will even ensure that the Affordable Care Act (ACA) does not force taxpayers to fund abortion.

There is a long-standing consensus in our nation – even among those who identify themselves as “pro-choice”– that taxpayers should not be coerced into paying for abortions. Since 1976 this policy has enjoyed bipartisan support and has been embodied in the Hyde Amendment and other policies regarding funding. However, there are inconsistencies in its application and most of these policies including the Hyde Amendment must be renewed every year. H.R. 7 will correct these inadequacies.

Urge your Congressional Representative to support H.R. 7 to permanently protect our tax dollars from paying for or promoting elective abortions. Send your message today!