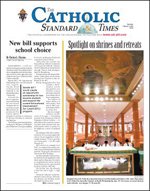 With the focus this week on Catholic schools, a new effort comes to light that would expand access for parents to the great gift of a quality Catholic education.

As a public policy issue, school choice has gained ground steadily in recent years. Because it is so compelling, school choice initiatives have flourished in the forms of individual learning plans (including at-home and cyber programs) in public schools, a wide variety of charter public schools and private school tuition scholarships funded by business tax credits.

All these options rightly give parents greater say over how their children are taught and which school they attend.

The one element of choice that has not overcome the biggest of roadblocks is the concept of vouchers, which would follow a child to whatever school his or her parents choose. Vouchers are now part of a major push in Pennsylvania for expanded school choice.

Senate Bill 1 now under consideration in the Senate Education Committee calls school choice vouchers “opportunity scholarships.” They would be made available over a three-year period to children in low-income homes: first children in failing public schools (those at the bottom 5 percent in performance among Pa. schools); then children in the attendance area of a failing school; and, finally, children statewide who meet eligibility requirements. The annual income threshold for a family of four, for example, is $28,665.

Today the ratio of private scholarship to EIO is 2-to-1. Under the Senate bill, the ratio would expand to 3-to-1 private/public, and the funding amount would increase to $100 million from the current $25 million.

S.B. 1’s cosponsors, Sen. Anthony Williams (D-Philadelphia) and Sen. Jeff Piccola (R-Dauphin/York), need the help of voters in the state, especially Catholics of the Archdiocese. Visit pacatholic.org to become an Advocate for Catholic Education in Pennsylvania (ACE-PA) and urge the support of your state senator for S.B. 1.

All parents should be able to choose a school that best suits their children. Tight household finances often put a quality school out of reach. The Opportunity Scholarship program in the bill would expand the ability of parents to make that choice. The time to help them is now.

This article appeared as an editorial in the February 2, 2011, edition of the Philadelphia Catholic Standard & Times newspaper.