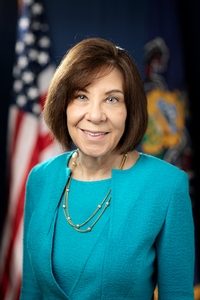 “I loved every minute of it,” she said. But the future state senator didn’t start out with the intention to make it a career. She quickly changed her mind.

“I graduated from Gettysburg College and knew I would go on to graduate school, but I needed a break. I needed my gap time to do that,” she told me during a recent visit to her district office. “What I came up with was that I would get a commission in the Navy, get a few good bullets on my resume, get some good experience in management and leadership and earn some education benefits to go one to graduate school, law school, MBA, something like that.”

But once she got in the Navy she was anchored in the for the long haul. She realized that she had found her career. And coming back to the place she grew up put her in some familiar company as far as many of the residents who live in her district.

Iovino also fits in well with the large number of Catholics in the area. She is Catholic and spent a number of years in Catholic school. So what led her to a career in the legislature? She says it’s not something that was on her radar as recently as five years ago. But she likened her career in the service to her new career in public service.

“What I have done for the past thirty years or so is have a career that is in the public sector,” Iovino said. “The public sector has been my lane professionally. I just was looking for what I wanted to do in this stage of my life that matched up my background and experience with a good opportunity to continue to serve and make a contribution. Somewhat to my surprise it ended up with me seeking elected office.”

Sen. Iovino has been a big part of the effort to pass Senate Resolution 6, an initiative to look into what has become a crisis of the shortage of paid and volunteer firefighters in Pennsylvania. She said that in the last decade, the state has gone from having more than 300,000 paid and unpaid firefighters to down around 38,000.