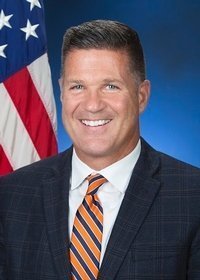 It was a scorcher on the day that I visited Sen. Mike Regan (R-Cumberland) in his Camp Hill district office but he was happy that it was summer and was getting a break from the Capitol.

We talked about the effort to get the Educational Improvement Tax Credit passed. Republicans were able to negotiate a $25-million increase in the program after Governor Wolf had vetoed a proposed $100-million increase. Regan talked about what transformed him into a big believer in the EITC.

“I can remember when I was in the US Marshal’s Service Governor Tom Ridge being a big school choice person and I kind of thought back then that—even though I wasn’t a parent yet–it should be a parent’s decision as to where the kids go to school.”

Regan said he didn’t have a personal connection to the program though until one day when he arrested a kid on a drug charge. When the suspect was in the back of marshal’s car Regan started talking to him about his life.

“A couple of things he said were striking and left a real impression on me. He said that in the Harrisburg School District that if you try in school, you will get beaten up for trying to get ahead. He also said the kids in Harrisburg aspire to go to prison, because you don’t have any ‘street cred’ until you go to prison. That was the late nineties, early two-thousands. I thought to myself ‘what is the answer to that? That’s so troubling’”

Years later Regan was asked to speak at a dinner for the Bob Craig Foundation. The Foundation was presenting a check to the Joshua Group, which Regan had not heard of.  The head of the group, Kirk Hallett, spoke along with two kids who were had taken part in the group’s learning programs.

“The one kid’s story really touched my heart,” Regan said. “He said ‘my mom’s a drug addict. I don’t know who my dad is. If not for my grandmother loving me I probably never would have wound up at the Joshua School. He said Kirk took me in and tutored me.’”

As it turns out, that young man had gone on to become an honor student at Messiah College. It dawned on Regan that he had found the answer to the question that had been raised several years before–to get these kids out of a failing school system and into a good school.

“It can mean the difference between life and death. Just taking a kid who if you look at the odds would be on welfare, possibly in the juvenile system or dead, to being a college graduate, job-holder, taxpayer, positive citizen. The true meaning of the EITC and the OSTC (Opportunity Scholarship Tax Credit Program) really hit home for me.”

“I really think that empowering these kids to reach their potential is an amazing thing. So I’m a fan.”

Regan says he and other lawmakers are also going to work on the problem of veterans’ suicides. He says 20 veterans commit suicide every day across the country and that the per capita average is higher in Pennsylvania. He says the legislators are meeting with stakeholders across the state to address the issue.

“I can’t imagine, Al, going over there and fighting for the people of this country and then coming back and not being able to deal with what you had to do and what you saw and taking your own life as a result.

“A lot of it I think is simplicity and streamlining things,” Regan continued. “First of all they’re typically a little closed off. They don’t want to talk about it. If they finally make that leap to wanting to talk about it and they have to call 20 people or be transferred or push a number of buttons to talk to someone, they’re more likely to just hang up. So we need to streamline that process and I think that’s one of the things that may come out in legislation.”