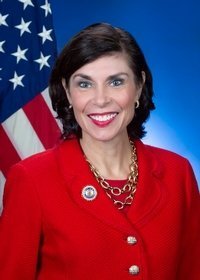 Sen. Kristin Phillips-Hill (R-York) has worked hard on a number of issues during her term in the state legislature, but the “Buyer Beware Act” has to be near or at the top of the list. The bill would strengthen penalties for those who patronize victims of human trafficking.

Rep. Seth Grove (R-York) is backing the companion bill in the House. He has also put in a ton of work on the issue. The PA Catholic Conference has strongly supported both measures.

Sen. Phillips-Hill thanked us for our support and says she is optimistic about the future of the bill, which she says will address a growing problem.

“We’ve gotten Senate Bill 60 through committee,” she told me during a visit to her district office in Jacobus, York Co. “It looks like we should be able to get full Senate consideration shortly and then it will be entrusted to their care to get it to the Governor’s desk.

The Senate is scheduled to reconvene on Monday, September 23rd.

“Human trafficking is a tremendous concern. It’s an issue here in York Co. and all across the Commonwealth. It happens more than you know. So many of us believe that it happens in far off lands or that it happened hundreds of years ago but the reality is that human beings are being trafficked. They’re living horrible lives and we have a great opportunity with Senate Bill 60 to change that going forward.”

In addition, those convicted of patronizing a victim of sexual trafficking would receive an increased fine of between $1,000 and $30,000, up from $500, at the discretion of the court. If the victim is a minor at the time of the offense, the fine would be increased to a minimum of $5,000 and a maximum of $100,000.

I asked Dauphin Co. District Attorney Fran Chardo how prevalent is the use of victims of human trafficking in the prostitution industry.

“It’s the vast majority of the time,” he said. “So it to be presumed (in each case) that it is so. People don’t’ engage in this behavior willingly. There are a number of ways that the trafficker will keep the person under their thumb and require them to continue this very dangerous course of conduct.”

Chardo says the difficulty comes in proving the actual knowledge that someone was being forced into the role. As a result, he believes that patronizing prostitute as a stand-alone crime should be a greater offense than just a misdemeanor of the third degree.