I walked into Sen. John DiSanto’s (15th District, Dauphin & Perry Cos.) office at the Capitol and in the middle of our conversation happened to ask him if he was Catholic. The Senator turned to his wall and pointed to what may be the largest crucifix–outside of a church– that I had ever seen. Keep in mind that I wasn’t around two thousand years ago.

Apparently it was a gift from a bishop and it fits perfectly in his office. Yes, that’s it in the picture, between the flags.

So with that in mind, it’s no surprise then that DiSanto is a firm supporter of issues like the Down syndrome abortion bill, which prohibits abortion on the basis of a diagnosis of a possible Down syndrome.

“I support Senator (Scott) Martin’s bill,” DiSanto said. Representative Kate Klunk is sponsoring the measure in the House. “My wife, Maria, and I have a Down baby godson who is getting older and these are clearly lives worth living. Whatever we can do to advance that bill across the finish line, we’ll be happy to do.”

DiSanto saw one of his bills just cross the finish line. It was the pension bill that requires the forfeiture of pension benefits employees who are convicted or plead guilty or no contest to a job-related felony offense.

“I was very happy the governor signed the bill two weeks ago,” DiSanto said. “The (former Senator Bob) Mellow example–$245,000 that was returned to him after serving six years in prison…Jerry Sandusky continues to get a pension even though he’s spending the rest of his life in prison. This will correct these loopholes that people have been able to sneak by.”

DiSanto is grateful that leadership introduced his bill very quickly this session and they were able to get it done.

One issue that is not done in the Capitol is that of a possible financial bailout of Three Mile Island. The issue is still up for debate. Many legislators are still undecided and feeling the pull of both sides of the issue—to bail or not to bail. But that is not a question any more for DiSanto.

“I am not supportive of the bail-out bill,” said DiSanto, who has a clear connection to the issue, since he represents Dauphin County. TMI is in Dauphin County.

“I’ve introduced legislation to help municipalities losing tax revenue to help them transition off of that. They would get 80% of their taxes the first year, then 60%, 40% and 20% over a four-year period to try to make them whole again.” 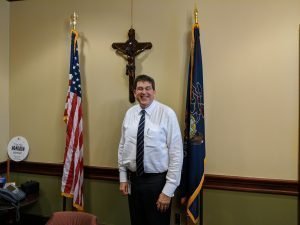 billion dollar companies. Exelon (the owner of TMI) is at a 10-year high and we need to make PA more business friendly.”

DiSanto said the legislature needs to lower the corporate net income tax, get rid of the stock franchise tax, reduce regulation and get here jobs here to replace the ones that will be lost with the closing of TMI.

“Jobs are always coming and going. Companies are rising and falling. That’s America. We just need to be competitive and offset that with competition, not government support and regulation.”