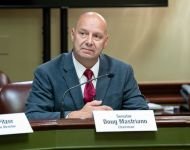 Sen. Doug Mastriano (R-Adams, Cumberland, Franklin, York) has been entrusted by leadership at the Capitol to head the Intergovernmental Operations Committee.  I had never heard of it either, but it actually serves a good purpose that Sen. Mastriano has jumped right onto.

“It’s finding ways to reduce bureaucracy and make the state government work better for you,” Sen. Mastriano told me on a visit to his Capitol office.  “I’m toying with the idea of calling it “The Bureaucracy Killer Committee.” Maybe that’s too war-like, but I am a retired Army colonel.”

Mastriano says it’s difficult for anyone to have liberty and pursue happiness with unbearable laws, taxes regulations that are pushing people out of their homes and businesses. In December Mastriano hosted a public meeting in Chambersburg to look into how to start cutting into those restrictions. He heard from residents and business owners and he ripped what he saw as one of the biggest producers of red tape and bureaucracy: the Department of Environmental Protection.

“DEP, you’re the poster child for what is wrong with state bureaucracy,” he told representatives from the department who spoke at the event. “You have to get off the backs of my taxpayers.”

Sen. John DiSanto (R-Dauphin, Perry) also attended the meeting in Chambersburg and spoke of similar frustration in dealing with the DEP during his several years in business.

“There’s a belief that there is not a willingness on the part of DEP to try to help businesses and citizens do the things that they want to do,” DiSanto said at the time. “There’s got to be a way to have a culture change within DEP to help the citizens of this Commonwealth to do things legally and respectful of the environment”

Sen. Mastriano then asked DEP to suspend the enforcement of MS 4 until the department can provide the five-year historic data on the project that had been promised.

What the heck is MS 4? The senator says it’s the latest scheme to take money from the taxpayers.

“They’ve come up with this cunning scheme here to transfer wealth out of my district and other districts back to Harrisburg,” Mastriano said. “It will then get filtered to Philadelphia and elsewhere. Once again the money will be fed to the corners. “

‘MS 4’ stands for Municipal Separate Storm Sewer Systems. Mastriano says it’s basically a separate utility that goes against business owners and property owners. He says it’s eventually going to hit farmers as well–anyone who has water that drains into a creek or sewer or whatever.

Mastriano says he and his staff have paged through the clean water regulations put forth by the Environmental Protection Agency and none of them can find justification for what amounts to a “rainwater tax.”

“That’s what I call it,” Mastriano says. “MS 4 is a stupid name for it. It’s a rainwater tax. They’ve even come against some golf courses in my district. ‘We’re going to charge you for evaporation.’ This is out of control. We need to rein these guys in.”

Mastriano says he has reached out to the DEP but they have not answered his questions. He says if they continue to avoid answering questions on how the charges and fines are levied, he’s going to see if they can be held in contempt.

“This is sick,” Mastriano fumed. “They need accountability. They can’t go out there and terrorize my people. Are we a free country when business owners can be driven out of business because you have faceless bureaucrats coming out from Harrisburg threatening you with fines if you don’t comply with these imaginary regulations they come up with?”