Sen. Andy Dinnaman Big on School Choice; Not so Big on Robocalls

PA Sen. Andy Dinnaman (D-Chester Co.) has done a lot of things in his long career of public service, but one thing in particular that he has gained widespread recognition and gratitude for is his support of the Education Improvement Tax Credit.  The E.I.T.C. program has helped public and private schools in general, but for Catholic schools it has meant the difference between many students staying or having to leave.

“I believe in school choice. I believe that parents have a role in determining the education of their children. And E.I.T.C. allows school choice to occur,” Dinnaman said. “But also part of the E.I.T.C. is that it funds foundations in traditional public schools which means that special programs can be created in these schools—supplementary programs, complimentary programs to the curriculum. Companies can contribute to E.I.T.C. and get tax breaks and at the same time we can help so many students go to the school of their choice.”

While Dinnaman may be one of the patron saints of the E.I.T.C. and maintaining its yearly increases, he is also on a crusade against robocalls.

“Robocalls have gotten out of hand,” he said. “We have had a series of hearings and I have legislation which would do its best to gain some control of these robocalls.  Any action taken has to be a combination of federal, state and the companies that run the phone systems.”

The senator says the problem is that the callers keep using new technology. But he says there is new technology that is evolving that will help residents recognize robo-calls so they don’t’ have to pick up the phone.

Dinnaman served as Chester County Commissioner from 1992 until 2006 when he decided to run for the seat left vacant by the death of PA Sen. Bob Thompson. Dinnaman was considered the underdog in the race because a Democrat hadn’t won the seat since the 1920’s. But Dinnaman won by getting 56% of the vote.  He has continued to closely monitor the electoral make-up of his home county.

Dinnaman says when he first got to Chester County 40 years ago it was about 3-1 Republican to Democrat in voter registration. When he ran for County Commissioner in 1992 that ratio had shrunk to 2-1. Now he says there is only a difference of 10,000, with 150,000 Republicans to 140,000 Democrats.

“We’re now one of the fastest growing counties in the Commonwealth,” he said.  “We’re now over a half-million, which makes us a Class 2 rather than a Class 3 county, though that official determination comes after the census occurs.

“It’s an interesting county. It’s the wealthiest county and the healthiest county. And the most highly educated county in Pennsylvania,” Dinnaman said.  “A recent survey also said we are the happiest county. I suppose if you have money, you have health and you have an education, that’s one way you can be happy!”

Dinnaman also pointed out the county does have its pockets of poverty, which he says is an issue that is being dealt with. He says there’s a sense of social commitment and social action based on the area’s Quaker routes added to by other faiths. 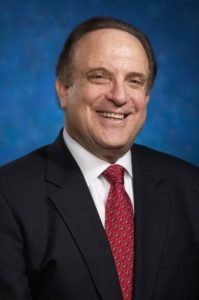