Seeking the Gateways Out of Poverty 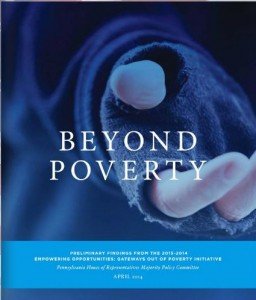 There is an oft-repeated parable that goes something like this:

One day a group of villagers was working in the fields by a river.  Suddenly someone noticed a baby floating downstream. A woman rushed out and rescued the baby, brought it to shore and cared for it. During the next several days, more babies were found floating downstream, and the villagers rescued them as well. But before long there was a steady stream of babies floating towards them.

Soon the whole village was involved in the many tasks of rescue work: pulling these poor children out of the stream, ensuring they were properly fed, clothed, and housed, and integrating them into the life of the village.

Before long, however, the village became exhausted with all this rescue work. Some villagers suggested they go upstream to discover how all these babies were getting into the river in the first place. Had a mysterious illness stricken these poor children? Had the shoreline been made unsafe by an earthquake? Was some hateful person throwing them in deliberately? Was an even more exhausted village upstream abandoning them out of hopelessness?

“Don’t you see,” cried some, “if we find out how they’re getting in the river, we can stop the problem and no babies will drown? By going upstream we can eliminate the cause of the problem!” (Credit: Bread for the World)

One group of state legislators is similarly concerned about the “rescue work” being done in Pennsylvania to address the effects of poverty. The House Majority Policy Committee commissioned a study to identify barriers that low-income Pennsylvanians face when attempting to reach self-sufficiency. In April 2014, the committee released the preliminary findings of their Beyond Poverty report.

“Government spends nearly a trillion dollars annually on programs to fight poverty, yet there are still 1.6 million Pennsylvanians struggling to make ends meet,” said Representative Dave Reed (R-Indiana), chairman of the policy committee. “Clearly we must readjust our focuses.”

Twelve barriers were identified: the breakdown of family support systems, lack of child care, the downturn in the economy, inaccessible health care, criminal records, financial illiteracy, inadequate education, homelessness, mental health issues, hunger, substance abuse, lack of transportation, and a “benefits cliff” where upward movement in an economic bracket results in loss off services before a family is able to provide for them independently.

Identifying barriers that entrap families in poverty is the first step of the Empowering Opportunities: Gateways Out of Poverty initiative that seeks to establish effective and sustainable solutions to poverty in the Commonwealth. The report will inform the committee’s next steps of building partnerships among community organizations, educators, job creators, and state government; developing comprehensive solutions to help families transition out of poverty; and maintaining a long-term outlook that promotes progress and facilitates growth.

The Gospel implores us to care for the poor. As long time advocates for policies that support those in need, the Pennsylvania Catholic Conference will be closely watching the work of the Empowering Opportunities initiative. We pray that the House Majority Policy Committee’s venture to go “upstream” will be fruitful in identifying effective gateways out of poverty.