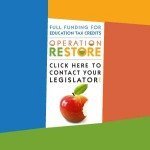 Fifteen hundred students, teachers, parents and legislators gathered at the Capitol on Tuesday, May 4, 2010, to show their support for the Educational Improvement Tax Credit (EITC) Program. The party is hosted every year with the dual purpose of celebrating the highly-praised program and to thank the legislators for their continued support.

“Having more than 1,500 students, parents, business leaders and teachers all gathered at the Capitol at one time to celebrate the success of the EITC Program sends a clear and strong message to the members of the legislature that school choice is working in Pennsylvania,” said Chris Bravacos, president of the REACH Foundation – the hosts of this event. “Legislators from both parties should be commended for their strong support for the EITC Program and the choices and chances it provides to students and families all across the Commonwealth.”

Recognized as a national model and the best example of public-private partnership in Pennsylvania, the EITC Program has allowed more than 40,000 students to attend the school of their choice in this school year alone, and hundreds of public school initiatives would have gone unfunded without this program. Since the program’s inception in 2001, over 250,000 students have benefited from the EITC. Additionally, the business community has contributed over $460 million to ensure that Pennsylvania’s children receive the education they deserve.

Legislators arrived in full-force at this year’s event to celebrate the EITC Program. With bi-partisan support in the legislature, this program is known throughout Pennsylvania as a “win-win-win” – a win for students, a win for the business community, a win for the state. Legislators speaking on behalf of the EITC were: Senator Jeffrey E. Piccola, Education Committee Chairman; Senator Anthony Williams, Minority Chairman, Senate State Government Committee; Senator Andrew Dinniman, 19th Senatorial District; Senator Jane Clare Orie, 40th Senatorial District.

“In this day and age, it’s more important than ever that ALL families, regardless of income or zip code, have choices when considering the education of their children,” said Senator Jeffrey E. Piccola. “The simple act of a parent signing an application form for a private school or charter school is an important manifestation of their commitment to their child’s education. The EITC Program is a great way to help parents who have already sacrificed so much to provide a top-notch education for their children. “

Though the EITC Program could face additional cuts in the 2010-2011 budget, school choice advocates in the legislature are willing to continue to protect it.

“As we celebrate the EITC’s 9th Birthday,” said Bravacos, “we look forward to many more years of helping children achieve their dreams.”