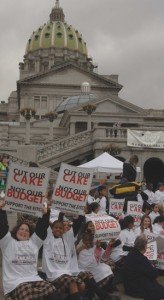 Thousands of students, teachers, parents and legislators gathered at the Capitol on May 5, 2009, to show their support for the Educational Improvement Tax Credit (EITC) Program. The party is hosted every year with the dual purpose of celebrating the highly-praised program and to thank the legislators for their continued support. Recognized as a national model and the best example of public-private partnership in Pennsylvania, the EITC Program has allowed over 44,000 students to attend the school of their choice in this school year alone, and hundreds of public school initiatives would have gone unfunded without this program. Since the program’s inception in 2001, over 200,000 students have benefited from the EITC. Additionally, the business community has contributed over $420 million to ensure that Pennsylvania’s children receive the education they deserve.

Legislators arrived in full-force at this year’s event to celebrate the EITC Program. With bi-partisan support in the legislature, this program is known throughout Pennsylvania as a “win-win-win” – a win for students, a win for the business community, a win for the state.

“The Educational Improvement Tax Credit Program has given businesses across Pennsylvania a chance to make a difference in their community while helping to improve education opportunities for children at the same time,” says Majority Whip, Senator Jane Clare Orie. “The EITC Program is crucial to organizations that rely on it to provide scholarships to young people. And it is vital to children and parents across the state who are looking for the best education opportunities available.”

Though the EITC Program could face cuts in the 2009-2010 budget, school choice advocates in the legislature are willing to continue to protect it.

While chants of “Cut our Cake, Not our Budget” and Senator Anthony Williams’ speech allowed party-goers to boo when asked “What do we do when someone wants to cut out our cake?,” Senator Jeffrey E. Piccola, Education Committee Chairman offered, “I am very proud that in Pennsylvania we can offer families opportunity and have been pleased to champion efforts that include giving parents and children educational choices. I will continue to promote the opportunity and importance of choice and work to protect the future of the EITC Program because I am too proud of its success and look forward to its continued growth.”

“These difficult economic times are forcing businesses, families, and most states to make difficult budgetary decisions,” said Andrew T. LeFevre, Executive Director of the REACH Foundation, the host of today’s event. “If the EITC is one of these budgetary cutbacks, tens of thousands of children will be put into a school which is not suited for their needs. The birthday party is a great way to show the legislature just how important this program is.”