by Blue
food pantry, harvest, Pittsburgh
Comments are off 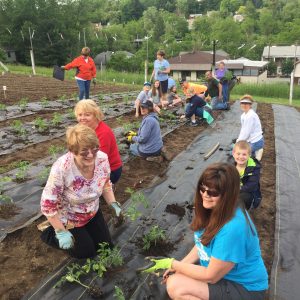 Volunteers get down and dirty during planting time earlier this year in the community garden at St. Joan of Arc Parish in South Park Township.

A few years ago, an official with the South Hills Interfaith Movement approached Father Phillip Pribonic, pastor of St. Joan, about starting a community garden that would grow vegetables for SHIM’s network of food pantries.

The 10,000-square-foot garden is now the largest one affiliated with SHIM.

St. Joan’s garden shares its produce with SHIM and a couple of other places, said Dr. Ron Boron, a retired general surgeon who coordinates the garden work. The other beneficiaries include The Intersection, an organization in McKeesport run by Mercy sisters; Shiloh Baptist Church; and South Park Meals on Wheels, which is run through Grace Lutheran Church in South Park.

“All of the organizations in SHIM last year produced about 12,000 pounds — 6 tons — of vegetables,” Boron said. “Last year our garden produced 6,000 pounds itself, two-thirds of which went to SHIM, and the other third to those other food pantries.”

Beginning with the first late-winter frost until well into October, the garden is a center of activity for the many volunteers who show up Monday and Wednesday evenings to till, fertilize, plant, weed and harvest.

Boron keeps in touch by e-mail with about 75 helpers, and about 20-25 consistently arrive to work.

He was brought up with gardening since his father had one at their home in Whitehall, and became a certified master gardener when he retired.

Father Pribonic blesses the garden every year, he said. And while four or five garden volunteers have passed away, their surviving spouses continue the special work that’s done to help those in need.

“When you see the product of what you’ve done and the camaraderie that we generate, it kind of makes you feel good.”