by Hill
abortion, anti-abortion, dignity, dignity of the human person, Down Snydrome, life, pro-life
Comments are off 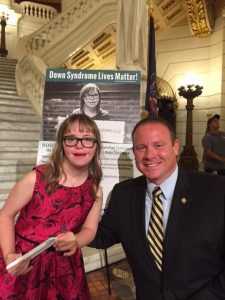 Pennsylvania State Senator Scott Martin (R-Lancaster) asked an important question, “What kind of society do we want to live in?”

Sen. Martin believes we should live in a world where everyone, including individuals with Down syndrome, is respected and admired for the joy and contributions they bring to society. As the prime sponsor of Senate Resolution 174, Martin is urging his Senate colleagues to join him in condemning the practice of selectively aborting fetuses with Down syndrome. President Pro Tempore Senator Joe Scarnati (R-Cameron, Clearfield, Clinton, Elk, Jefferson, Mckean, Potter, Tioga), Senator John DiSanto (R-Dauphin, Perry), and Senator John Eichelberger (R-Blair, Cumberland, Franklin, Fulton, Huntingdon) also voiced their support.

Studies show that as many as 90% of babies in the United States who are diagnosed with Down syndrome in the womb are aborted. This statistic is alarming considering that life expectancy for people with Down syndrome has increased dramatically in recent decades, from at 25 in 1983 to age 60 today. Babies born with Down syndrome now live long, happy, and productive lives.

Ms. Kondrich is a high school student with Down syndrome who accompanied her father to the State Capitol to urge support for the Senate resolution. Kurt Kondrich, Chloe’s dad, is Senior Director of Development for the Human Coalition. He answered Senator Martin’s question saying, “We need human beings like Chloe – they bring unconditional love and there is no malice in her.” Chloe is proof that Down syndrome lives matter too.