Rep. Torren Ecker Started in D.C. but Came Back to PA 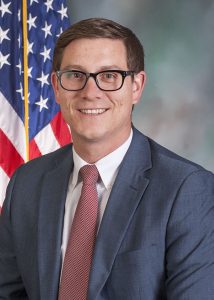 Rep. Torren Ecker (R-Adams, Cumberland) says he always had an interest in running for elected office. While in college at George Mason University, he worked on Capitol Hill for Congressman Jo Ann Davis. He figured he’d spend some time in D.C. working in politics.

But then the plans changed.

“I met my wife and we decided that living in D.C. wasn’t where we wanted to raise a family,” Ecker told me during a visit to his Abbottstown district office. “I decided to go to law school right out of college. We spent three years in Michigan and came back to Pennsylvania, which was always the plan.”

He worked for ten years as an attorney in Hanover but then got word that Rep. Will Tallman was going to be stepping down. His friend, Rep. Kate Klunk (R-York) reached out to him and suggested a run. “She’s a really good friend, been a good advisor. I sit beside her on the House floor and she’s my office-mate in Harrisburg.”

It has been a busy freshman term for Ecker already. He naturally signed on as a co-sponsor for Klunk’s Down Syndrome Protection Act. He is pro-life as well. He’s also had legislation of his own that he has worked on.

“There’s 40 new freshmen, so unlike the past when they tell you to be quiet and listen, this term we got some opportunities to run some good bills,” he said. “I got to run three bills myself. One of them dealt with strangulation and making that a violent crime. I did a firefighter bill which relaxes the standards for junior firefighters so that we can recruit young people into the volunteer fire service.”

Ecker also worked on some House procedural bills, which were given to him because of his legal background. This fall he will be working on legislation dealing with workforce development: ways to encourage people to get into trades and healthcare.

“One of the areas that we do locally that’s been really advantageous is that our local school districts have been investing in their metal shops, mechatronics and welding programs to try to recruit kids in high school to get into those trades.”

Ecker is planning on introducing a bill this fall that would enable those schools to be able to lease equipment rather than have to go buy it outright at a hefty price.

I asked Ecker a question that I’ve been posing to freshman reps and senators over the last couple of months—is it a tough transition and are people generally nice?  Very deep, intellectual question, I know. But I really am curious.

“I know what I’m doing. I think I joked in March that I know where the bathrooms are now,” Ecker said. “I catch on pretty quickly. I’m a pretty fast learner. I’ve been through a budget now, albeit a pretty easy budget. I feel like I’ve learned the process now.”

Okay, but what about the chumminess factor?

“I think that if you could ask me one thing that was surprising it would be how well people get along in Harrisburg. There are certain issues where the Democrats are going to be in their corner and the Republicans are going to be in there corner, but we pass a lot of bi-partisan bills. I have a lot of friends on the other side of the aisle…so my experience for having been there nine months is very positive. I think people appreciate that. Don’t get me wrong, I’m going to stick pretty strong to my core issues and things that are important to me, but there is a lot of common ground in a lot of areas.”