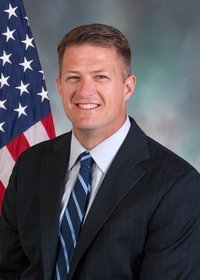 Rep. Tim O’Neal (R-Washington) continues an impressive trend in western Pennsylvania politics–of veterans coming back to their native area for a career in public service. O’Neal served in Afghanistan.

“My father had served for four years when he was younger but I initially didn’t go toward the military,” he told me on a recent visit to his suburban Pennsylvania district. “My parents are divorced and after my freshman year of college my mother actually asked me to explore the National Guard to help pay for school. And I fell in love with it.”

O’Neal went on to active duty in the Army infantry as a Second Lieutenant in 2003. He concedes there were some tough times during his tour of duty, but….

“I wouldn’t change almost anything about it,” he said. “It’s strange to say, but the experience of war overall was an extremely positive experience. I did have a squad leader killed, so that’s the one thing I would change. But other than that it was an overall positive experience.”

O’Neal got out of the Army in 2007, worked in the energy industry and then went on to become a human resources director for a construction company. However, he says he missed the service component in the private sector.  He decided to seek public service.

The 48th District has been electing Democrats forever–until O’Neal that is. It doesn’t seem like it’s due to a big change in the voters. Maybe it’s a case of the voters seeing a change in their party–whether it be locally, state-wide or nationally.

“It’s one of the things about our area of Washington County and the 48th District in particular. It really is a wonderful place and it doesn’t matter what letter is behind your name. We basically have the same viewpoints. We’re generally conservative. We’re generally God-loving and God-fearing and the values from southwestern Pennsylvania are pretty similar across parties. I am a fiscal conservative and I consider myself conservative overall and that resonates with the area regardless of what letter is behind your name.”

O’Neal is working on a bill that would call for a Constitutional amendment to require any overages in revenue to be deposited immediately into the Rainy Day Fund to ensure that government spending is kept in check.