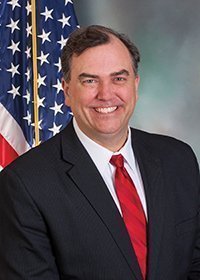 Rep. Tedd Nesbit (R-Butler, Mercer) has followed a familiar path to the state Capitol. He began his career as an attorney.

“Small-town lawyer, but a former assistant district attorney,” Nesbit told me during a recent visit to his Capitol office. He was kind enough to squeeze in some time to talk with us during a busy session day in Harrisburg. “I did court-appointment cases and a little bit of everything, really.”

Nesbit is now running for judge for Mercer County Court. A number of the bills that he has worked on and passed have dealt with the criminal justice system. They include…

– Senate Bill 916, which contains Nesbit’s House Bill 2308 and will modify the process for a defendant to file a petition for DNA testing eliminating the requirement that the person who requests testing be serving a term of imprisonment or awaiting execution after being sentenced to death.

– House Bill 159, which gives judges within the juvenile court system the flexibility to look at the facts of the case and assign the most appropriate sentence to the minor.

In the meantime Nesbit continues to serve the people of the 8th district.

“I’ve always believed in giving back to the community,” he said. “I was very active before this, with United Way, in the church . And when my predecessor retired, I had several people reach out to me and say ‘you should do that.’ So I decided to jump in and here we are about five years later.”

One of the bills that Nesbit is working on now would deal with the crime of sexual extortion. It has passed the House and is currently in the Senate. He says it helps the law catch up with technology.

“What’s happening is that people are putting some personal information on their phones or on the internet and then other people would use that information to extort more information or embarrassing things about them. Right now the way the law works, it’s only considered a crime of extortion if you ask for money. Our bill then makes it that if you ask for things of value that would also be a crime.”

Nesbit says they are working with the district attorney’s office on the bill to help prevent people, especially young people, from being exploited.

“The FBI says this is the number one crime against children,” Nesbit said. “Because a lot of times they will put things out on their phone, they think they’re just sharing it with a friend and then the next thing you know they’re being asked for more information.”