Rep. Steven Mentzer Doing His Best to Help Residents With the Red Tape 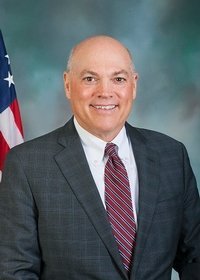 Pennsylvania’s state revenues benefited from a robust economy by recording a huge surplus this year. Rep. Steven Mentzer (R-Lancaster) was very appreciative of that and of the fact that it helped fund human services. Mentzer says human services represents the biggest growth area in the budget.

“We’ve been able to do a lot with that increased funding to increase mental health services,” Mentzer told me when I visited his district office in Lititz, “along with services for the disabled to get them out of the institutions and into the community. We’re very excited about that.”

Mentzer said it shows what the free enterprise system and a strong economy can do for human services.

Lawmakers did manage to save a bunch of that money as well. They put $317-million into the Rainy Day Fund thanks to the surplus in this year’s budget. They can draw on that when things aren’t going as well with the economy.

That was all settled in June when the budget was signed and the lawmakers then left for their respective districts. It is them time to meet with the people—some by appointment and some just showing up to ask for help. Mentzer says there are fair amount of constituents that come to his office looking for help in understanding the bureaucracy involved in government. That does not bother him one bit. He says that’s why they are there.

In fact, he is working on a bill that would help people with the pre-authorization process to get medication or a medical procedure. That process can be confusing and sometimes lengthy. Mentzer has taken notice.

“My bill does not eliminate pre-authorization but what it does do is give a set of guidelines so the insurer, patient and provider understand clearly the process that is required for pre-authorization.”

I thanked Mentzer for his support of the Educational Improvement Tax Credit. He sees an example of where that EITC money can help—there’s a Catholic school in his district. “There are gracious enough to always invite me to their awards ceremony,” he said. “I enjoy that. I am a big advocate of the EITC.”

We talked about one of the biggest challenges facing the legislature. It’s one that they’ve been working on for years but has proven to be no easy fix—property tax reform.

“That’s a tough one,” Mentzer acknowledged. “That’s a real tough one because there are so many winners and losers. But I’m hopeful that we’ll be able to come up with some kind of a reasonable compromise and reasonable solution over the next year or so.”

I mentioned a recent property tax reform plan that was proposed recently that would tax the income of retired citizens. They aren’t happy about it. Mentzer has hear about it too.

“My district, the 97th district, which is a suburb of Lancaster City…I think I have nine or ten retirement communities,” Mentzer said. “I think you can conclude from the fact that I have these retirement communities like Brethren Village and Luther Acres are not happy with the idea of taxing their pension checks. But we’ll see where that goes.”