Barrar is talking about the scarcity of firefighters and other first responders across the state. He chairs the House Veterans Affairs and Emergency Preparedness Committee and heads the group which has been selected to tackle the problem.

“The SR-6 Commission was put together with a House and Senate resolution to create a commission to look into the crisis that’s occurring within the Emergency Management System around the State of Pennsylvania,” said Rep. Barrar. That deals with firefighters, EMT’s, paramedics and other first responders around P-A.

Barrar says part of it is tied to the various fire departments not being to get increases in their budgets and to ambulance companies not being able to get reimbursements for their services.

“Every month I get notified about a fire or ambulance company that has shut its doors,” he said. “How do we stop that from happening? It’s up to the state to have a plan to deal with this crisis before we end up seeing people dying because they pick up the phone to call 9-1-1 and nobody responds in the appropriate amount of time.”

Barrar says there about 35 recommendations that come out of the SR-6 Commission. He says the most important one deals with recruiting and retention of new firefighters and volunteers to staff the fire houses and ambulance services that are highly trained *and* are willing to volunteer.

“If not, we’re going to have pay them and then that will create a different kind of crisis because that’s going to be very, very expensive,” Barrar said. “Most people don’t realize the tradition of volunteer firefighters started in Philadelphia with Benjamin Franklin. It has lasted for hundreds of years and we want to see it continue.”

Barrar says everything in the report will take separate pieces of legislation to be put into effect. He says they’re in the process of having those bills written and assigned to the House members that will try to push them through. The hardest part will be to get the necessary funding.

“I was disappointed in this year’s budget because the Governor increased spending by over $900-million this year and not one penny was spent toward the crisis we currently see,” Barrar said. “That at times makes me want to call for a very special session on this crisis.”

I asked Barrar if he thinks it’s gotten to that point.

“Yes I do,” he said. “One of the things we can do is start allocating real dollars. Right now we have a $30-million program that benefits the whole State of Pennsylvania. But with over a thousand fire companies, that $30-million doesn’t buy a whole lot. We need about ten times that if we’re really going to make an impact here.”

Barrar said there are some ways to get that, possibly with the severance tax on natural gas drilling or re-purposing the current tax on alcohol into the emergency management area. 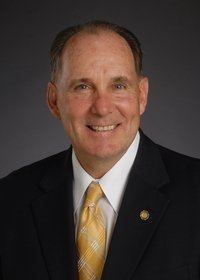