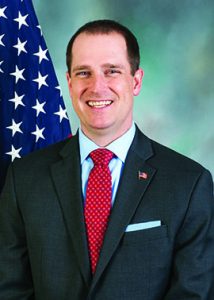 The state legislature has had fewer session days this fall than in the past. The cynics would say that lawmakers are getting it easy. Those on the inside would know better.

“That’s one of the biggest misconceptions. People tend to think that when we’re not in Harrisburg, we’re on vacation and we’re off,” Rep. Ryan Warner (R-Fayette, Westmoreland) told me on a visit to his Capitol office. “I often tell people that we’re a lot busier back in the district. We do spend a lot of time in Harrisburg, so when we are back home we have to catch up on a lot of things. There’s constituent work, whether it’s meetings with organizations, catching up on issues with our municipalities, Penndot issues…”

Ryan started working in his family’s logging business when he was a kid, then worked as a project controller at Siemens Industry when he got out of college. He wanted to be active for his community and figured a position in public office, representing the people from his home area would be the best way to go about it. He has an intense pride for his district, which encompasses parts of Fayette and Westmoreland Cos. He talked about an incident that happened three years ago that brought out the very best in the people that he represents.

“In 2016, the city of Connellsville, which I represent, was hit with a devastating flood. I mean an awful flood, where it literally wiped out a part of the city, and into Bullskin Township. It was like a disaster area. It looked worse than a tornado. It devastated the city. And I saw firsthand the people of that community come together to help out their neighbors. The sacrifices they made, whether it was time, money, whatever they could do, people pitched in to help out.”

Warner said he worked with several different government agencies during that flood and that they all remarked how impressed they were with the community’s effort.

“They said there has never been the community support and the cooperation in a natural disaster than what they’d seen in the city of Connellsville.  And you want to talk about taking pride in something. That’s what I take pride in. That’s why I want to afford my children the chance to have a future here, so they can be a part of that, a part of this community.”

At the top of Warner’s priority list is working to cut out wasteful government spending. He’s been working on the Taxpayer Protection Act, which limits the amount that the government can spend each year. The spending limit is based on population growth and inflation. He says the bill would allow spending to go over that cap, with three-quarters of the General Assembly approving.

I also asked Warner what his future plans are and if he likes being a state representative. He said that he does and he gave a great answer on what it’s like to him.