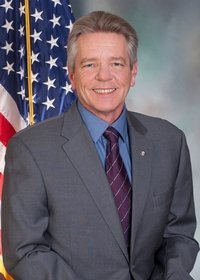 Russ Diamond has introduced a constitutional amendment to change the way we elect judges in Pennsylvania. Instead of electing judges for appellate courts—Commonwealth, Superior and Supreme — on a *state-wide basis*, the bill would have the state divided into districts. It would also require the voters and the candidates to live in a particular district.

“Pennsylvania could easily be divided into seven or eight regions with distinctive cultures, different traditions and different views on what the constitution actually means,” Diamond said. “For instance, when we deal with laws in the General Assembly, we have a wide, diverse group of 203 people, and we run ideas through a filter to get a consensus for the best law for Pennsylvania as a whole.”

But Diamond feels the process should be different for laws. “That regional diversity should be represented on our courts.”

Diamond says he has run in two state-wide races and it takes a lot of energy and a lot of money. He says the district system would be a lot easier for voters to know who those judicial candidates are.

But Diamond says his favorite bill right now is the one to end Daylight Saving Time.

“The real goal there is to stop the nuisance and the absolutely archaic practice of changing clocks twice a year in Pennsylvania,” Diamond said. “It’s a public safety concern.  Workplace accidents, heart attacks strokes, all sorts of bad health effects come into play in the weeks after we change those clocks—both in the fall and in the spring.”

The question that would arise is: what time will we settle on—daylight time or standard time? Diamond says states can change to permanent standard time without federal approval. But to stay on Daylight Saving Time, Diamond says, you need Congressional approval. At least that’s way it supposed to be. He doesn’t think it would be a big deal to defy Congress on the issue. He says PA already does it with medical marijuana.

It was hard for me to get a time slot to talk with Diamond. All lawmakers are very busy these days. A lot of that is due to committee meetings on the budget.

I had met Diamond when he was a political activist back in 2005 after the infamous late-night/early-morning PA legislative pay-raise vote. He started the group PACleanSweep.com, which was dedicated to ousting all incumbents. I asked Russ if he likes it better on the inside.

“For the vast majority of my colleagues, they are all fine human beings, with families, wives, husbands, children.”

“When you look across that aisle and instead of seeing them as the enemy and get to know them as human beings, you find a lot more commonalities than differences. Then you can find ideas that you can work together on. I think that’s the most important thing about being here.”