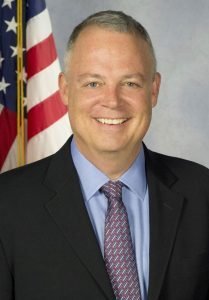 Rep. Perry Warren (D-Bucks) is a recently-established “empty nester.” Warren and his wife Liz have five children and the youngest has just left the house.

“It made me sad, but they come home a lot,” Warren told me on a recent visit to his Capitol office. In the meantime he has plenty to keep him busy—both in his district in Bucks Co. and when he is at the Capitol. One of the issues we talked about was Warren’s introduction of a bill in the last session to establish a minimum age for marriage in Pennsylvania of 18. He is co-sponsoring the measure with Rep. Jesse Topper (R-Bedford, Franklin, Fulton).  The issue was brought to his attention in 2017 by two of his constituents.

“That bill really became an issue about awareness and the recognition that there is currently no minimum age to get married in Pennsylvania,” Warren said. “Pennsylvania is one of twenty-some states that have no minimum age.”

He started reading about the situation and learned about what are often coercive types of marriages. He then introduced a bill two years ago to make 18 the required age for marriage in Pennsylvania.

“It gathered support,” he said, noting that they PA Catholic Conference backed the measure. “It had bipartisan support and ultimately the bill passed this spring unanimously in the House of Representatives. We’re hoping the Senate will take action on it. It’s a bill about protecting children, letting children be children.”

Under current PA law, a marriage license may be issued to an applicant younger than 16 with court approval. A marriage license may also be issued where an applicant is older than 16 but younger than 18 with the consent of a parent or guardian. If the bill is passed, Pennsylvania would be the third state to ban child marriage. Delaware and New Jersey passed similar laws in 2018.

Warren is also working on passing gun legislation and talked about why he is so committed to that cause.

“As a father of five children, who’s lost a child, from a town called Newtown– the shootings in Newtown Connecticut– and I live five doors from an elementary school…those shootings really, really hit home with me and my family. Since then I’ve really been an advocate for gun safety legislation.”

He has recently introduced House Bill 373 which would require universal background checks. Another one of his bills would require that guns be stored safely in homes. And yet another of his measures would prevent guns from being sold to suspected terrorists.

“These are bills that we think of as gun safety bills,” he said. “Bills that would keep our homes, our communities, our places of worship safe.”

Warren started his career in public service back in 2009 when he took office on the Newtown Borough Council. He has worked as an attorney in his own firm, but he also operates his own ice cream truck as a family business. That is something he started when he was 19.